Life Explained, Part Nineteen: "One Into Darkening Hills Leads On, And One Toward Distant Seas"

I find Walter de la Mare's poetry to be at its best when he abandons the late-Victorian diction of much of his verse.  Although he was close to Edward Thomas, and greatly valued Thomas's poetry, he seldom used the straightforward (but deep) approach that Thomas and Robert Frost embarked upon.  Nonetheless, de la Mare's poetry is still enjoyable.

The following poem is more plain-spoken, and I can almost hear a trace of Thomas in it.  (And not simply because it shares the same scene as "Adlestrop.")  As to the subject:  I suppose that journeys and way-stations on those journeys lend themselves to larger considerations. 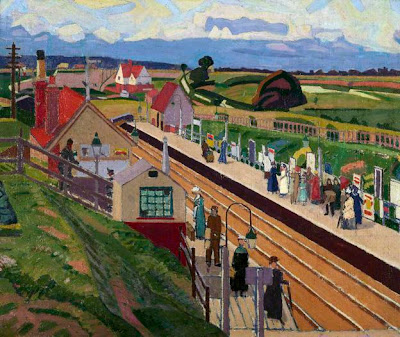 My primary school years were full of Walter de la Mare. I always felt ashamed that he bored me. Were he and Frost friends, or do the dates not fit? I imagine them both deciding one afternoon to each write a poem about a dividing road. I prefer Frost's effort, I think.

Maybe there is a conjoined influence at work here: not just Edward Thomas's 'Adlestrop' but maybe also Frost's 'The Road Not Taken' ... ?
Talking of 'thoughts and visions on/from a train' poems, do you know the one by Cecil Day-Lewis 'Seen from a Train', published in his Poems 1943-1947 and republished in the 1992 Complete Poems ? A Hardyesque poem in language, metre and sentiment, but one that has always attracted me despite its derivative nature. C.Day-Lewis nowadays usually only appears as a team member of the Thirties Poets, or the Pylon Poets. Otherwise another forgotten Poet Laureate. But like his predecessor in that office - John Masefield - he produced a large body of poetry, prose, fiction and drama that is worth investigating. (As he is among the alumni of my school, I admit a certain loyalty!)
The topography of the poem describes the church of St Roch, Pendomer. (The text of the poem can be found by googling the opening 'Somewhere between Yeovil and Crewkerne it was'- though not all the postings of the text are correctly attributed to Cecil Day-Lewis)

zmkc: it seems that you and Mr. Noel-Tod are on the same trail. I hadn't thought of the connection. Frost and de la Mare did know each other. Edward Thomas had tried to arrange a meeting between them when Frost was living in England, but it never took place. They did meet when de la Mare visited the U.S. in 1917, and corresponded thereafter. Apparently Frost was particularly fond of de la Mare's "The Listeners."

I understand what you are saying about de la Mare's poetry. But then I come upon things like "To E.T.: 1917," "Night," or "All That's Past" that draw me back to him now and then.

As always, thank you for your visit and for your thoughts.

Mr. Noel-Tod: as I noted in my response to zmkc, the two of you caught a Frost connection that I had missed.

Thank you for the reference to the poem by Day Lewis. I had not read the poem before, but I do have the 1992 Complete Poems and I read the poem this evening -- it is very fine. I agree that he tends to get treated as a satellite of Auden. (Even MacNeice shared that fate, although I think that lately he is receiving more recognition on his own.) I have always meant to explore Day Lewis more thoroughly, and the poem gives me a push to do so.

I appreciate the topographical reference as well: that is something I would never have known. I see that it is near East Coker.