In view of my previous post on the wordlessness or wordiness -- take your pick -- of the wind (and, for that matter, of the World in general), the following poem may be pertinent.  That being said, I have always felt that I have never fully grasped its meaning.  But (as I am wont to say), it sounds lovely.  Which, in this instance, may be the point.

I have presumed (perhaps wrongly) that the title refers to the musical composition of that name, defined by the OED as "a species of musical composition in which the different parts take up the same subject one after another, either at the same or at a different pitch, in strict imitation."  For musical illiterates such as I, Wikipedia helpfully states that a "round" such as "Row, Row, Row Your Boat" or "Frere Jacques" is a type of canon.  Now that I can understand.

Canon
Beside the paper-mill at
Burneside, Westmorland 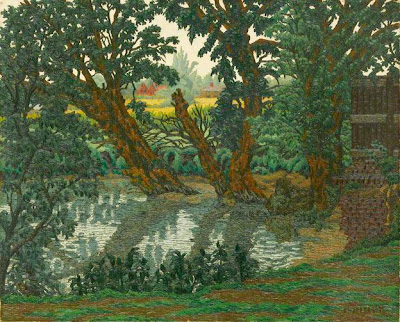