A Matter Of Perspective

Yes, whether speaking of the state of civilization or the state of our own soul, we should keep things in perspective, as the old saw goes.  Yet, sooner or later, you end up on the beach, or in the field, or on the threshold of the house.  And this, of course, is as it should be.

Seen from above
The field is a flap and the haycocks buttons
To keep it flush with the earth.

Seen from above
The house is a silent gadget whose purpose
Was long since obsolete.

But when you get down
The breakers are cold scum and the wrack
Sizzles with stinking life.

When you get down
The field is a failed or a worth-while crop, the source
Of back-ache if not heartache.

And when you get down
The house is a maelstrom of loves and hates where you --
Having got down -- belong. 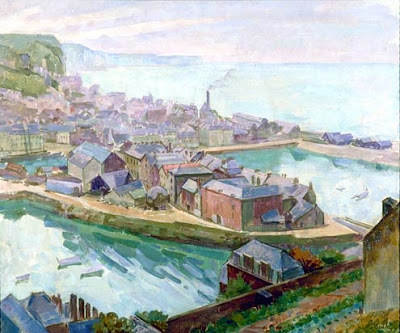 Such beautiful illustrations of your blog. Gorgeous!

S R Plant: I hadn't thought of that -- yes, the "ladder's gone", leaving only "old kettles, old bottles, and a broken can" fit very well.

Thank you for dropping by again.

Goethe Girl: thank you very much for visiting, and for your kind comment. I'm pleased that you like the images -- another of the wonders of the Internet! I'm old enough to say: "who would ever have thought that we would have this sort of thing at our fingertips?"