"Eternity Is Not Length Of Life But Depth Of Life"

Charlotte Mew, like any self-respecting Victorian poet, wrote her share of graveyard poems.  Although I think of Mew as a modern poet, her life (she was born in 1869, and died in 1928) spanned both the Victorian and the "modern" worlds.  Perhaps her funerary poems are a sort of remnant of her Victorian origins (with a touch of Romanticism thrown in).

Before turning to one of Mew's poems, here is a passage from her essay "The Country Sunday":

"Often on moonlit nights, while from within the church the wheezy voluntary sounded, the moon, to my thought, has touched white headstones, giving them a weird and wakeful prominence -- leaving the unmarked mounds bathed in a gentler, more forgetful light.  Under the sward they slumbered more securely, those of whom men recorded nothing, leaving their virtues and their names with God; those whom man had remembered seeming to have missed their rest.  Still I recall one puzzling line, written on a small marble slab over a child, whose short years numbered only three -- 'Eternity is not length of life but depth of life,' and I have since many times wondered what was the history of that little child." 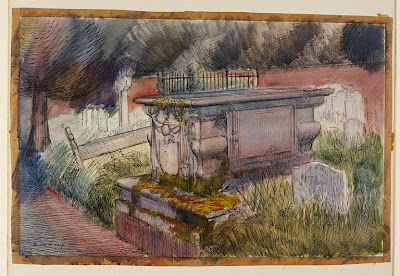 It is difficult to top the unknown philosopher who carved "Eternity is not length of life but depth of life" on the child's grave marker.  This rural philosopher may have stolen a march on Ludwig Wittgenstein, who, many years later, wrote:  "If we take eternity to mean not infinite temporal duration but timelessness, then eternal life belongs to those who live in the present."  Ludwig Wittgenstein, Tractatus Logico-Philosophicus, 6.4311 (Pears/McGuinness translation).

On Youth Struck Down
(From an unfinished elegy)

Oh! Death what have you to say?
'Like a bride -- like a bride-groom they ride away:
You shall go back to make up the fire,
To learn patience -- to learn grief,
To learn sleep when the light has quite gone out of your earthly skies,
But they have the light in their eyes
To the end of their day.' 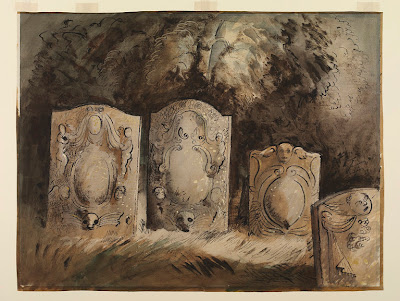 Thanks for the posts on Mew and the information on books containing her work. I usually only see her poems in collections but I think I've had the push I needed to explore more of her work.

Thanks for visiting again, Dwight.

Each time that I return to Mew's poetry I make new discoveries that surprise me. I think that you will be well-rewarded by exploring her work further. I had not read her essays and short stories until recently, and they are worth looking into as well.

Both Hurley, and Hinton in the Hedges, are quite near where I live.

VM: thank you very much for visiting and commenting. That is a nice coincidence. Harold Hussey painted a number of watercolours in and around Hurley in 1940 and thereabouts as part of a government project to employ artists known as "Recording Britain." I'm sure that I will be posting further work by Hussey at Hurley in the future.