Charlotte Mew's "Smile, Death" (which appeared in my previous post) has a bit of a Romantic/Gothic air to it that is not necessarily characteristic of Mew's poetry as a whole.  Although she certainly addresses Love and Time and Death in her poems, she usually does so in a lower-case fashion.  The following poem is a fine example.  Two possible translations of the title are:  "What's the good of saying/speaking?" or "What's the point of saying/speaking?" 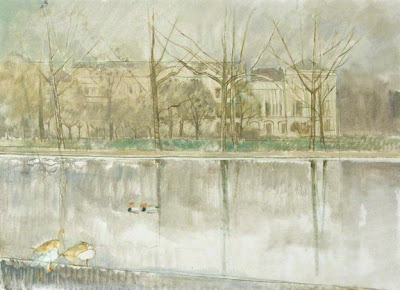 Seventeen years ago you said
Something that sounded like Good-bye;
And everybody thinks that you are dead,
But I.

So I, as I grow stiff and cold
To this and that say Good-bye too;
And everybody sees that I am old
But you.

And one fine morning in a sunny lane
Some boy and girl will meet and kiss and swear
That nobody can love their way again
While over there
You will have smiled, I shall have tossed your hair.

To my mind (and I claim no originality to this thought), the tone and diction of a poem such as "A Quoi Bon Dire?" show that Mew is in the line that moves from Thomas Hardy through Edward Thomas to Philip Larkin (to name the key figures).  This line, which is often thought of as being poetically "traditional" (or "old-fashioned"), sounds more contemporary and more natural to my ear than the oftentimes portentous and artificial "Modernism" of Eliot and Pound and their followers, which to me sounds dated and stilted. 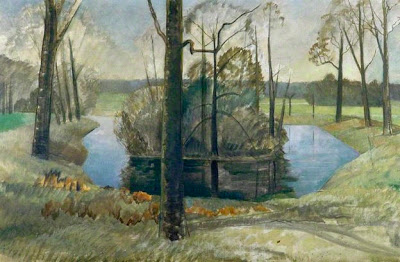 I've just found your blog and it is a fantastic resource for the student poet (which I am). Some of my favourites are here (MacCaig, Blunden) some I've heard of but don't really know, and some I never even heard of. I love the pictures you choose too, Nash in particular. I'll keep stopping by.

VM: thank you very much for visiting, and for the kind words. I'm pleased that you found your way here. Part of what I aspire to do is to preserve (and promote) the work of neglected, or less-well-known, poets, so I hope you find some new poetry that you like here. Thanks again.

I'll add my name to your list of admirers. Your blog is a delight. Truly extraordinary.

I'll say. This poem sounds like Tom Waits' "In the Harbor"

Mr Rickard: I greatly appreciate your kind words, and I thank you for taking the time to comment. As I have noted before, I am always gratified (and surprised and flattered) when people discover the blog and, furthermore, like what they find here. Thanks again.

Mr Sigler: well, there are two people that I never thought that I would hear mentioned in the same breath: Charlotte Mew and Tom Waits! I'm not familiar with the song -- I'll give it a search.

Thought I'd tag on the end of these comments. Been following your blog for nearly a year now and look in maybe a couple of times a week. I'm a professional artist and initially found my way here because of the great paintings you continue to post. Besides the poetry, I've discovered a lot of excellent artists since coming here. Keep up the good work.

Mr Corfield: thank you very much for your continued visits, and for your kind words. I'm always pleased to discover that the artists and poets I feature are enjoyed by others as well. And thank you also for the link to your art!

I found my visit refreshing. Thank you. Ray Busler
ray.busler@gmail.com

Mr. Busler: thank you very much for visiting, and for your kind words. I hope that you will drop by again.