There are quite a few magnolia trees in my neighborhood.  At this time of year, the large, furry buds begin to emerge.  Wallace Stevens mentions yet-to-awaken magnolias in the following poem -- one of his wonderful late poems, written in his seventies.  It is set in "the pre-history of February."

It makes so little difference, at so much more
Than seventy, where one looks, one has been there before.

Wood-smoke rises through trees, is caught in an upper flow
Of air and whirled away.  But it has been often so.

The trees have a look as if they bore sad names
And kept saying over and over one same, same thing,

In a kind of uproar, because an opposite, a contradiction,
Has enraged them and made them want to talk it down.

What opposite?  Could it be that yellow patch, the side
Of a house, that makes one think the house is laughing;

Or these--escent--issant pre-personae:  first fly,
A comic infanta among the tragic drapings,

Babyishness of forsythia, a snatch of belief,
The spook and makings of the nude magnolia?

. . . Wanderer, this is the pre-history of February.
The life of the poem in the mind has not yet begun.

You were not born yet when the trees were crystal
Nor are you now, in this wakefulness inside a sleep.

Wallace Stevens, "The Rock," Collected Poetry and Prose (The Library of America 1997). 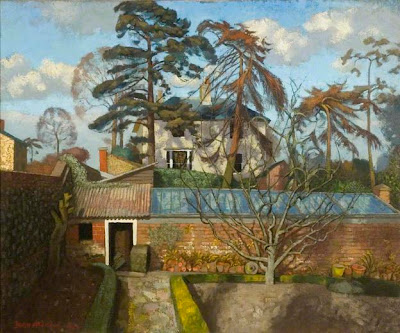 Stevens's observation that the trees "kept saying over and over one same, same thing" brings to mind his poem "The Region November" (the loveliness of which I have touted on more than one occasion).  In that poem, the trees

A revelation not yet intended.

It is important to recognize that, in Stevens's world, "poem" has a definition that goes well beyond "verse":  throughout Stevens's poetry, "poem" means the imagination interacting with the world and the world interacting with the imagination.  Back and forth, back and forth.  The title of another of his late poems perhaps sums this up:  "Reality Is an Activity of the Most August Imagination."  (And we mustn't forget "A Rabbit as King of the Ghosts.") 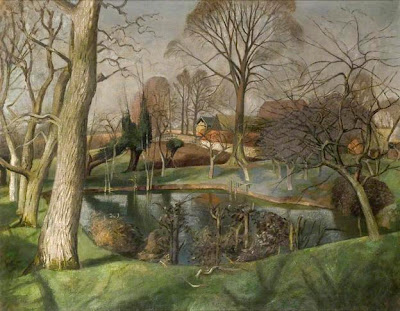 Wow, you never miss the opportunity to celebrate poetically the finest gradations in the seasons, Mr. Pentz!

I read a lot of poems, and somehow whenever Stevens comes into the mix, he always roars. Poets tend to write about their poems as journeys, how each poem is conditional and disposable as they grow, much like a snake sheds skins. Here, I see readers in their own development can view the deposited snake skins differently over time.

Many of the nuances of this particular poem had escaped me until you posted it this morning, but now it gains power in the light of the Holderlin and Muir lost Eden elegies I’ve been reading. That brutal last stanza in particular helps me understand why Stevens said the imagination took the place of belief: because it leads, however wrapped in skeptical difficulty, to the real (what Kant called the numinal and the Asians call the tao).

It’s always the world around us, like the cloying growth in early February, that reminds us it’s the journey itself that really matters, the snake and not the skin.

Mr Sigler: as always, I appreciate hearing from you.

I like what you say about returning to poems -- they do sometimes seem to change when we come back to them, don't they?

I might have to debate you on whether the final stanza is "brutal," though! "Wakefulness inside a sleep" holds a great deal of promise, I think. To me, there is an implication of birth to come: i.e., "the life of the poem in the mind has not yet begun," but it may soon do so. Just a thought.

I mentioned ages ago (slightly shamefacedly) that I'd never come across Stevens until reading your blog - thank you for more of his poems, plus your commentary, which is always helpful and interesting

I'm pleased that you are still enjoying the poems by Stevens, zmkc. He can be difficult. Thank you for the kind words on my commentary, which is, I'm afraid, a stab in the dark much of the time.