I'd like to stay with butterflies a moment longer in order to consider a poem by Robert Frost.  I recently posted a haiku by Moritake (1472-1549) in which a butterfly was mistaken for a falling flower:

A fallen flower
Returning to the branch?
It was a butterfly.

The image is a beautiful one.  In the following poem, Frost speaks of "flowers that fly," thus echoing (unconsciously, I presume) Moritake.  But there is more:  Frost's opening image may perhaps be even lovelier.  (Not that this is a competition.) 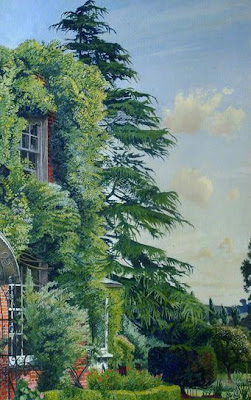 It is blue-butterfly day here in spring,
And with these sky-flakes down in flurry on flurry
There is more unmixed color on the wing
Than flowers will show for days unless they hurry.

But these are flowers that fly and all but sing:
And now from having ridden out desire
They lie closed over in the wind and cling
Where wheels have freshly sliced the April mire.

It is fitting that a great poet of snow would think of blue-butterflies as "sky-flakes down in flurry on flurry."  And, as one might expect from Frost, there is a twist at the end.  Mud and sky.

Perhaps not surprisingly, "Blue-Butterfly Day" is followed in New Hampshire by "The Onset," which is about the first snow of winter.  It begins:  "Always the same, when on a fated night/At last the gathered snow lets down as white/As may be in dark woods."  Nor is it surprising that "The Onset" is in turn followed by "To Earthward."  With Frost (save when he is pontificating), one is usually asked to look at all sides of things. 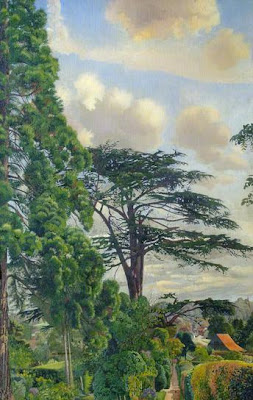 Stanley Spencer
"Cookham from Englefield" (1948)
Posted by Stephen Pentz at 12:10 AM

Very nicely put. Frost is fond of butterflies (without feeling the need, like Nabokov, to 'collect' them). There is also 'My Butterfly' in his first book; and 'The Tuft of Flowers' features a butterfly.

I have recently stumbled upon your blog - with great pleasure, I might add.

I am discovering poems which have avoided me thus far in my life, and artists too. Both are a delight.

I once said I never started my education properly until I left school. Now I could say the poetry arm of it was almost dormant before I discovered Edward Thomas, and like your comment about one artist leading to another, I find it is the same with poetry for me.

Tim: thank you very much. And thank you as well for the reminder about Frost's other butterfly poems -- I had forgotten about them.

I am looking forward to soon reading your The Art of Robert Frost! (Fellow Frost admirers: Professor Kendall's new book will be published by Yale University Press this spring. He has not asked me to promote it, and I hope he will not mind if I say that I highly recommend it.)

Bovey Belle: thank you very much for your kind words. I'm happy that you arrived here, and I'm pleased that you enjoy the blog.

It is nice to hear that your interest in poetry was invigorated by discovering Edward Thomas. I can still remember my initial delight at discovering him -- a delight which is still with me. And it is wonderful how one thing leads to another when it comes to poetry and the arts in general.