Robert Bridges's line "all day in the sweet box-tree the bee for pleasure hummeth" (from "April 1885," which appeared in my previous post) brings to mind W. B. Yeats's well-known vision of paradise: "Nine bean-rows will I have there, a hive for the honey-bee,/And live alone in the bee-loud glade."

What do you do with a poem like "The Lake Isle of Innisfree"?  It is difficult to see afresh, isn't it?  And one is hampered by the hard-to-envision spectacle of Yeats, the ambitious, grandiose, cape-wearing bard, taking himself off to the woods to live in a self-built (!) clay-and-wattle cabin and tend to nine rows of beans.  Not likely.  (Although I should note, in fairness to Yeats, that the poem was written when he was in his mid-twenties, before he had become a "smiling public man" (as he describes himself in "Among School Children") and a national treasure.)

But, in spite of all this, the poem always beguiles me.  It does, after all, speak to something that most of us can understand.  It is a lovely poem. 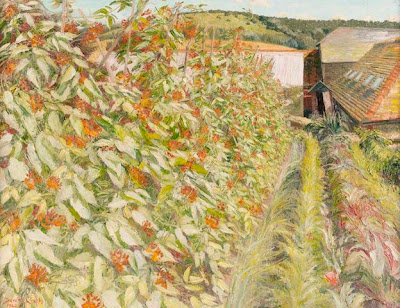 W. B. Yeats, The Countess Kathleen and Various Legends and Lyrics (1895). 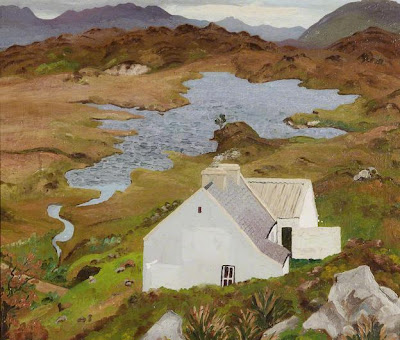 I"ve often thought that the reason the poem is so touching is that he didn't go there---an unfulfilled dream, like so many we all have.

Maybe Yeats was hoping Maud Gonne would join him! I always like the line about evening being full of Linnet's wings. Thats a wonderful image in just five words.
Beautiful post as always.
julie

Mary F. C. Pratt: thank you for that thought, which is a fine one. I shouldn't be so hard on Yeats -- he is, as you say, expressing a yearning that most of us share.

Julie: Yeats wrote the poem around the time when he first met Gonne -- so you may be right! (Or perhaps he was feeling lovesick, and wanted to get away.) Yes, the image of the linnet's wings is a lovely one, isn't it?

Thank you for your thoughts, and for the kind words.

I see this poem as a very lovely piece of escapism, the imagery is both calming and serene.

The paintings you find are gorgeous, each one surpasses the one before.

acornmoon: thank you for stopping by again, and for your thoughts. Yes, "Innisfree" is perhaps the quintessential day-dreaming poem, isn't it? I'm pleased that you like the paintings -- I enjoy tracking them down and seeing how they complement the poems (and vice-versa).

The poem always makes me want to weep.

Another way to derive additional pleasure from Yeats’ “Innisfree” is to listen to Yeats himself reciting it. To some--but not to me-- Yeats sonorous reciting style might be off-putting and sound melodramatic and “stagey”.

I, however, never tire in rehearing the audio he made for the BBC. The following quote best describes the effect of listening to that recording. (Please forgive that I’ve lost the attribution for the quote.)

“In his autobiography Yeats identifies the poem as a significant one, "my first lyric with anything in its rhythm of my own music". The poem, written largely in hexameters, has a tranquil rhythm, something Yeats emphasizes in his reading. This is somewhat at odds with more contemporary vocal styles which favor a more conversational tone, but Yeats' quavering incantation has a unique power of its own.

ethel mertz: I think that that is a perfectly reasonable reaction. As always, thank you for visiting.

Mr. Berman: thank you for visiting, and for the information on Yeats's reading of the poem -- I have never heard it, and will track it down. Thanks again.

I've recently been coming across writers who are describing the intimacy that accrues when one 'stays put' - Wendell Berry's essay "Imagination in Place" from which he titles his latest collection of essays and Roger Deakin's "Wild Wood - A Journey Through Trees" come to mind. Deakin's book starts with an essay called "Staying Put" in which he quotes from Donne's A Valediction, Forbidding Mourning" ...

Thy firmness draws my circle just,
And makes me end where I began.

A great series of postings Stephen. Thank you very much.

... from a chilly and bright London on a quiet Good Friday.

PS. Yeats reading this poem can be found at

... with some thoughts about being in London thinking about Ireland ...

Eamonn: thank you very much for stopping by again.

The references to Berry, Deakin, and Donne are apt. It has been quite some time since I read anything by Berry, and your bringing him up makes me want to visit again. I thought that I hadn't heard of Deakin, but I looked him up on the Internet and I realized that I had heard of him before: "Ah, the guy who swam across England!" Unfortunately, I haven't read anything by Deakin, but I need to. The essay you reference sounds like a good place to begin. Thank you for that.

The Donne lines are very fine. "Makes me end where I began" immediately brought to mind Eliot's lines from "Little Gidding": "And the end of all our exploring/Will be to arrive where we started/And know the place for the first time." As you know, Eliot knew Donne's poetry quite well. I wonder if he had Donne's lines in mind?

And thank you as well for the link to the reading by Yeats. I haven't had a chance to follow it yet, but I will. I remember reading somewhere that he said the poem was prompted by hearing the sound of water in a small fountain in a shop in London.

I think your choice of paintings
in general is marvelous ,so much to discover from the last century obscured by modernism.... Thanks for this superb blog ...P.Howlett Gubbio Italy

eugubino: thank you very much for your kind words.

I agree with your assessment of "modernism" -- it is both obscure and obscuring, isn't it?