"These Things Go Too Deep For Mere Words"

In her memoirs, his friend Eleanor Farjeon writes:

When Helen [Thomas] came to know Edward's Captain, Franklin Lushington, he told her that as Edward stood by his dugout lighting his pipe all the Germans had retreated, but a last shell they sent over passed so close to him that the blast of air stopped his heart.  'He told me,' Helen writes, 'there was no wound and his beloved body was not injured.  This was borne out by the fact that when the contents of his pockets were returned to me -- a bundle of letters, a note-book and the Shakespeare Sonnets I had given him, they were all strangely creased as though subject to some terrible pressure, most strange to see.  There was no wound or disfigurement at all.  He just died standing there in the early morning after the battle.'  Captain Lushington told Helen that Edward could have had a job 'back and safe, but he chose the dangerous front observation post.' 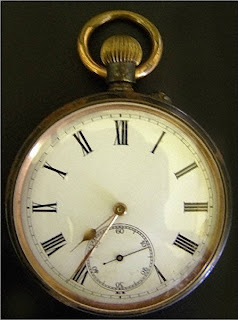 On April 10, 1917, Captain Lushington wrote this in a letter to Helen Thomas:

I cannot express to you adequately in words how deep our sympathy is for you and your children in your great loss.  These things go too deep for mere words.  We, officers and men, all mourn our own loss.  Your husband was very greatly loved in this battery, and his going has been a personal loss to each of us.  He was rather older than most of the officers and we all looked up to him as the kind of father of our happy family.

He was always the same, quietly cheerful, and ready to do any job that was going with the same steadfast unassuming spirit.  The day before his death we were rather heavily shelled and he had a very narrow shave.  But he went about his work quite quietly and ordinarily as if nothing was happening.  I wish I could convey to you the picture of him, a picture we had all learnt to love, of the old clay pipe, gum boots, oilskin coat, and steel helmet.
. . . . .
We buried him in a little military cemetery a few hundred yards from the battery:  the exact spot will be notified to you by the parson.  As we stood by his grave the sun came and the guns round seemed to stop firing for a short time.  This typified to me what stood out most in your husband's character -- the spirit of quiet, sunny, unassuming cheerfulness. 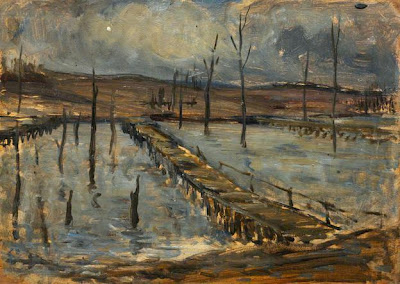 Many poems have been written in memory of Edward Thomas.  My favorite is by his friend Walter de la Mare.  As I have noted before, the poem is remarkable in conveying (in eight short lines) the pain of the loss suffered by those who knew and loved Thomas, as well as something essential about Thomas himself.

You sleep too well -- too far away,
For sorrowing word to soothe or wound;
Your very quiet seems to say
How longed-for a peace you have found.

Else, had not death so lured you on,
You would have grieved -- 'twixt joy and fear --
To know how my small loving son
Had wept for you, my dear. 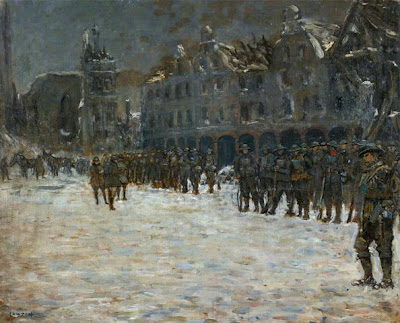 I haven't commented in a while, but check your blog each day. Thank you for this remembrance of Edward Thomas, who I came to know through Robert Frost and have cherished for some years now. It is especially fitting on Easter when we ponder redemption after sacrifice. I appreciate the effort you put into this.

Mr. Bauer: thank you for your thoughts about Edward Thomas. I'm happy that you stopped by again, and I greatly appreciate your kind words.

In my recently acquired Collected Poems (Walter de la Mare), the poem in memory of Edward Thomas is immediately followed by this one...

The haze of noon wanned silver-grey,
The soundless mansion of the sun;
The air made visible in his ray,
Like molten glass from furnace run,
Quivered o'er heat-baked turf and stone
And the flower of the gorse burned on —
Burned softly as gold of a child's fair hair
Along each spiky spray, and shed
Almond-like incense in the air
Whereon our senses fed.

At foot — a few sparse harebells: blue
And still as were the friend's dark eyes
That dwelt on mine, transfixèd through
With sudden ecstatic surmise.

'Hst!' he cried softly, smiling, and lo,
Stealing amidst that maze gold-green,
I heard a whispering music flow
From guileful throat of bird, unseen: —
So delicate, the straining ear
Scarce carried its faint syllabling
Into a heart caught-up to hear
That inmost pondering
Of bird-like self with self. We stood,
In happy trance-like solitude,
Hearkening a lullay grieved and sweet —
As when on isle uncharted beat
'Gainst coral at the palm-tree's root,
With brine-clear, snow-white foam afloat,
The wailing, not of water or wind —
A husht, far, wild, divine lament,
When Prospero his wizardry bent
Winged Ariel to bind....

Then silence, and o'er-flooding noon.
I raised my head; smiled too. And he —
Moved his great hand, the magic gone —
Gently amused to see
My ignorant wonderment. He sighed.
'It was a nightingale,' he said,
'That sotto voce cons the song
He'll sing when dark is spread;
And Night's vague hours are sweet and long,
And we are laid abed.'

Deb: Yes, "Sotto Voce" is lovely, isn't it? Like "To E. T.: 1917," I think that it captures perfectly the essence of Thomas's personality. De la Mare's sorrow is piercing in each poem, but in an understated way. Very touching. "To E. T." always brings a tear to my eye when I read it.

Thank you very much for stopping by again, and for sharing the poem.