"The Flowers Left Thick At Nightfall In The Wood"

Edward Thomas wrote the following poem on April 6, 1915.  It is set in "Eastertide."  As I noted in my previous post, Thomas died on Easter Monday, April 9, 1917 -- two years after he wrote the poem.  Thus, an already poignant poem is made more so by the circumstances and timing of Thomas's death.

The flowers left thick at nightfall in the wood
This Eastertide call into mind the men,
Now far from home, who, with their sweethearts, should
Have gathered them and will do never again. 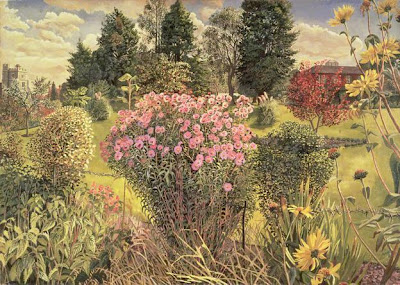 Thomas wrote no poems after he was posted to France in January of 1917. And he did not return.  Hence, he never wrote any "battle" or "trench" poems along the lines of those written by Sassoon, Blunden, Owen, and Rosenberg.  However, he was keenly aware of the losses that were being felt, as "In Memoriam" makes clear.  These losses are also apparent in the following lines from his untitled poem which begins "As the team's head-brass flashed out on the turn."  The dialogue is between a man ploughing a field and the narrator of the poem.
. . . . .
'One of my mates is dead.  The second day
In France they killed him.  It was back in March,
The very night of the blizzard, too.  Now if
He had stayed here we should have moved the tree.'
'And I should not have sat here.  Everything
Would have been different.  For it would have been
Another world.'  'Ay, and a better, though
If we could see all all might seem good.'
. . . . .
Ibid. 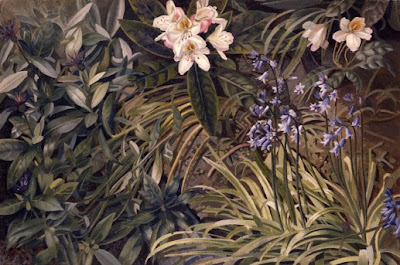 Stanley Spencer, "Bluebells, Cornflowers and Rhododendrons" (1945)
Posted by Stephen Pentz at 12:10 AM