"Breathe On Me Still, Star, Sister"

. . . the fearful and ripening and enormous
Being that -- bounded by everything, or boundless --
For a moment becomes stone, for a moment stars.

The translation of those lines is by Randall Jarrell.  The juxtaposition of stone and stars puts me in mind of a poem by Jarrell that appears in the same collection in which his translation of "Evening" appears.

Star, that looked so long among the stones
And picked from them, half iron and half dirt,
One; and bent and put it to her lips
And breathed upon it till at last it burned
Uncertainly, among the stars its sisters --
Breathe on me still, star, sister.

Randall Jarrell, The Woman at the Washington Zoo (1960). 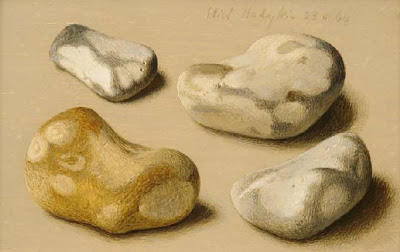 I never felt that I understood this poem, and then I came upon a passage in a memoir of Jarrell written by Mary von Schrader Jarrell, his second wife. Soon after they first met, she and Jarrell were out for a walk along a dry stream bed in Colorado, where she found an unusual-looking stone.  She suggested jokingly to Jarrell that it was a meteorite.  Jarrell later wrote "The Meteorite":  he is the meteorite; she is the star.  Mary von Schrader Jarrell, Remembering Randall: A Memoir of Poet, Critic, and Teacher Randall Jarrell (1999), pages 9-10.

The anecdote provides a good lesson:  poems often have their origins in prosaic circumstances.  I am reminded of Wallace Stevens's explanation of "A Rabbit as King of the Ghosts," that lovely and enigmatic poem:  at the time that he wrote it, he was worried about a rabbit that was visiting his garden each morning and eating the flower bulbs.