"Three Fishers Went Sailing Away To The West . . ."

The best-known poem about "fisher-folk" in the Victorian era was probably "The Three Fishers" by Charles Kingsley.  This is most likely due to the fact that it was set to music soon after it was published, and became a popular song.  Versions of it are still sung today. 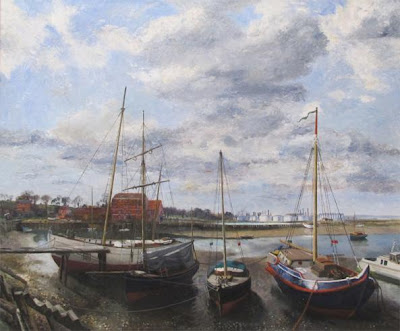 Three fishers went sailing away to the West,
Away to the West as the sun went down;
Each thought on the woman who loved him the best,
And the children stood watching them out of the town;
For men must work, and women must weep,
And there's little to earn, and many to keep,
Though the harbour bar be moaning.

Three corpses lay out on the shining sands
In the morning gleam as the tide went down,
And the women are weeping and wringing their hands
For those who will never come home to the town;
For men must work, and women must weep,
And the sooner it's over, the sooner to sleep;
And good-bye to the bar and its moaning.

Charles Kingsley, Andromeda and Other Poems (1858). 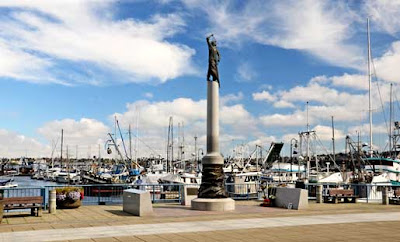 The "moaning" of "the harbour bar" is explained by Kingsley Amis in a note to the poem:

"The late Philip Hope-Wallace told me that, in the common estuary of the rivers Taw and Torridge in Barnstaple (or Bideford) Bay, the joining of their waters and the incoming sea can between them, if conditions are just right, produce a loud moaning sound above the sand-bar at the mouth of the inlet.  Kingsley had lived in that part of north Devon and was no doubt referring to a local superstition."

Kingsley Amis, The Amis Anthology: A Personal Choice of English Verse (Hutchinson 1988), pages 328-329.  The "superstition" of which Amis writes is the belief that, if the bar is moaning, it is betokening the coming death of those who cross it. 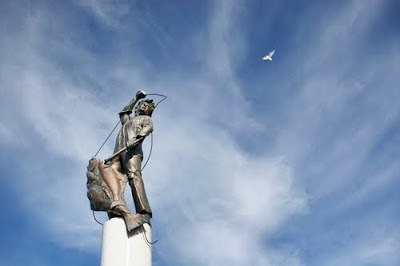 Lest we think that the poems that I have recently posted by Charles Kingsley, Christina Rossetti, Arthur Symons, and Ernest Dowson are quaint relics of a by-gone era, I have included images of the Seattle Fishermen's Memorial with this post. 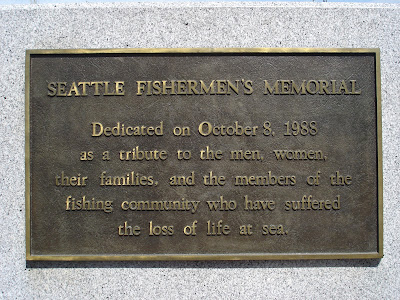 The Memorial is located at the Fishermen's Terminal, which is about two miles from where I live.  Flowers may usually be found at the Memorial, together with personal items that have been left by the family and friends of those whose names appear on the engraved plaques that are to the left and right of the statue. 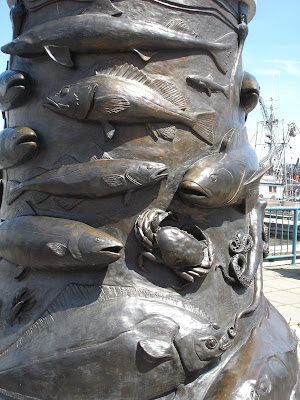 Metal sculpture at the base of the statue
Posted by Stephen Pentz at 12:10 AM

Indeed, Mr Pentz, not just quaint relics, as you say. Your post brought to mind the folk song about the Great Gale of 1889. Perhaps you know it? One verse goes:-

And it's three score and ten
Boys and men were lost from Grimsby town.
From Yarmouth down to Scarborough
Many hundreds more were drowned.
Our herring craft, our trawlers,
Our fishing smacks, as well,
They long did fight that bitter night
And battled with the swell.

I often think that folk music is the poetry of the people. I believe someone, I can't recall who, once said, "The price of fish is counted in men's lives".
Best Regards.

Mr. McEwan: thank you very much for the reference to the song, which I wasn't aware of. (Nor was I aware of the Great Gale of 1889.) I've since found a couple of performances of it on the Internet -- very nice.

As always, thanks for visiting, and for your thoughts.

I love the Tennyson... I have been to Seattle (I grew up just across the water in Victoria, BC) but I can't remember if I've seen the memorial or not.

I have just started reading Passage to Juneau by Jonathan Raban, and he starts out around this memorial and its associated tragic scenes, before setting out towards Alaska.

Ms. Aykroyd: thank you for visiting again, and for your thoughts. I haven't had a chance to read Raban's book, so I appreciate the reference. I believe that he still lives in Seattle.