Charles Kingsley's "The Three Fishers" (which appeared in my previous post) revolves around the image (and sound) of the "moaning" of "the harbour bar."  According to Christopher Ricks, who has edited Alfred Tennyson's poetry, Tennyson owned a copy of Kingsley's Andromeda and Other Poems (1858), in which "The Three Fishers" appeared.  Christopher Ricks (editor), Tennyson: A Selected Edition (1989), page 665.  Further, Tennyson's wife Emily noted in her journal that he read some of Kingsley's poems to her in 1858.  Ibid.

Tennyson wrote "Crossing the Bar" in October of 1889 when crossing the Solent to the Isle of Wight.  Although the poem was prompted by that journey, Kingsley's "Though the harbour bar be moaning" may have been hovering somewhere in the back of his mind as well. 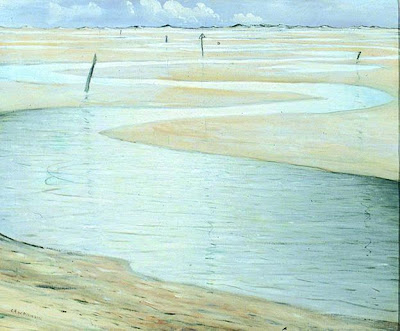 Sunset and evening star,
And one clear call for me!
And may there be no moaning of the bar,
When I put out to sea,

But such a tide as moving seems asleep,
Too full for sound and foam,
When that which drew from out the boundless deep
Turns again home.

Twilight and evening bell,
And after that the dark!
And may there be no sadness of farewell,
When I embark;

For though from out our bourne of Time and Place
The flood may bear me far,
I hope to see my Pilot face to face
When I have crost the bar.

Commentators on the poem usually link "bourne" in line 13 to Hamlet's description of death as "the undiscovered country from whose bourn/No traveller returns."  Shakespeare, Hamlet, Act III, Scene i, 79-80. Coincidentally, Christina Rossetti wrote a poem titled "The Bourne," which I have previously posted here.  The poem was published in 1866, but I am not suggesting that it influenced Tennyson, merely noting another use of the word in Victorian poetry.

Commentators also suggest that "face to face" in line 15 may be an allusion to 1 Corinthians 13.12:  "For now we see through a glass, darkly; but then face to face." 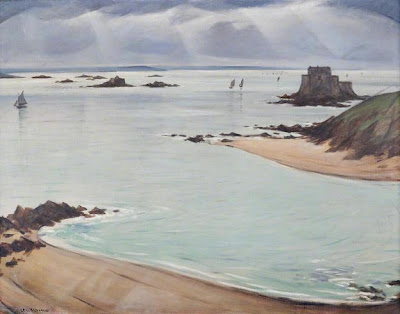 Christopher Nevinson, "Saint-Malo"
Posted by Stephen Pentz at 12:10 AM

I’ve toggled my share of lit’ry sites these five and varied years, “hits” that undoubtedly total in the thousands if not tens of thousands, but this is the first time I’ve come across a Tennyson poem, or indeed any reference to Tennyson that was not part of a dismissal in passing of all that was antiquated and fey in verse. Hearing this (yet another of your exquisite sea ode selections) it’s easy to see why earlier generations of poets all tried to write like Tennyson. He makes it all seem so easy. The strong iambs that drove Pound crazy one sees now were ways of playing with the meter, in a way not unlike later free verse experimentation. And there’s a lot of thematic richness here too, not the sentimental abstraction reviled by the modernists but a space where spirit and flesh can hopefully merge.

I see now too the genesis of that strange early Elton John song “Take Me to the Pilot” now (confessing my lack of Tennyson knowledge). Thank you so much for sharing this. I especially appreciate the details like including the original volume of poems this came from instead of, say, collected works. It really brings me to a time and place.

May you continue to find such messages in bottles amid the driftwood on the shore!

Mr. Sigler: I'm pleased that you liked the poem, and I thank you for the kind words about the blog. Well, this is an exercise in preservation (if nothing else), and Tennyson deserves preserving.

Besides, I guess I've always had a soft spot for him since reading "The Charge of the Light Brigade" when I was a kid. Not for the rhyme and meter, of course: for the doomed horsemen and the battle scenes!

However, I confess that I'm not about to wade into "Maud" or "Idylls of the King" anytime soon. Still, he has his moments.

I am so beguiled by all the Christopher Nevinson paintings that I have only skimmed the poems. I like the ambiguity of "grown pensive" -- the lanes, the lovers, the onlooker? I will come back to the poetry again to read them more carefully. But could you give the sources of the paintings on your blog generally? - they are much enjoyed. thanks. S. Berris

S. Berris: thank you for visiting again, and for your thoughts. Yes, I have wondered to what/who the "grown pensive" refers as well. Sometimes I think the lanes, sometimes the lovers.

I find the paintings at various places: museums, galleries, etc. Fortunately, a large number of British paintings from museums throughout the UK have been gathered at a wonderful site called BBC: Your Paintings, which you are probably familiar with.