I have never been to Brittany, but I have an idealized, romanticized, late-19th century vision of it.  This vision is centered upon Pont-Aven, where Paul Gauguin, Paul Serusier, and other French artists lived and painted in the late 1880s and early 1890s.  This Breton world is a green world.

Then, to top it off, comes an ill and impoverished Ernest Dowson, the Decadent poet par excellence.  Dowson stayed in Pont-Aven in the late 1890s, writing despairing poetry and despairing letters.  Green still predominates.

I realize, of course, that the vision that I have conjured up has nothing in common with present-day reality, but I am content with that. 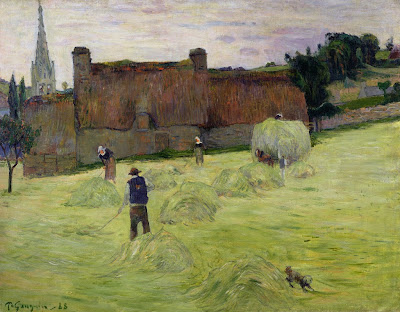 In a Breton Cemetery

They sleep well here,
These fisher-folk who passed their anxious days
In fierce Atlantic ways;
And found not there,
Beneath the long curled wave,
So quiet a grave.

And they sleep well
These peasant-folk, who told their lives away,
From day to market-day,
As one should tell,
With patient industry,
Some sad old rosary.

And now night falls,
Me, tempest-tost, and driven from pillar to post,
A poor worn ghost,
This quiet pasture calls;
And dear dead people with pale hands
Beckon me to their lands. 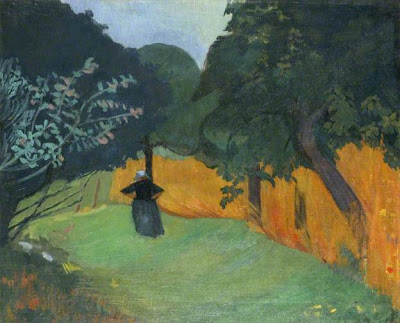 Dowson's poem is reminiscent of at least two poems by Christina Rossetti on the theme of death as sleep: "Life and Death" ("Life is not sweet.  One day it will be sweet/To shut our eyes and die . . . Asleep from risk, asleep from pain"), and this: 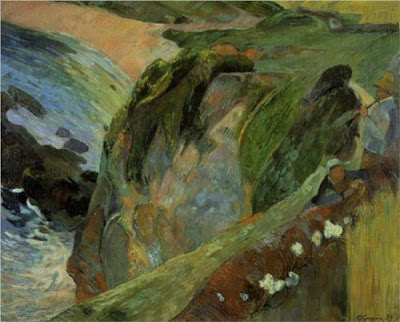 What a feast this post is. I've never seen this bucolic painting of Gaugin's and its a stunner.
I adore E. Dawson. Only 32 when he died, but his verse is tight, crisp, unforgettable. My father used to recite the complete poem'I have been faithful to thee,
Cyrana, in my fashion'
(may have spelled incorrectly)
and I loved the mystery and sadness and longing of that poem.
'Days of Wine and Roses' as well is the essence of poignant verse.
j

Julie: thanks for visiting again, and for your thoughts.

Yes, that Gauguin surprised me the first time that I saw it. I first came to know his work (like many of us, I suppose) through his Tahitian paintings, but I have found over the years that his paintings in Brittany are my favorites.

Lucky you to have your father recite "Non sum quails eram bonae sub regno Cynarae"! I have a soft spot in my heart for Dowson as well.

As ever, thank you.

Mr. Pentz,
So good to come across this lovely little work of Dawson again. It's elegy for simple, ordinary people and their unsung lives immediately reminds me of Gray's "Elegy Written in a Country Church Yard" - probably my favourite poem. Indeed, your post has prompted me to re-read it and to re-acquaint myself with Dawson too. Many thanks!

Mr. McEwan: thank you for stopping by again, and for your thoughts.

I hadn't thought of Gray's "Elegy" -- I appreciate your bringing it to mind. (And, like you, I feel the need to re-visit it as well, now that you mention it!)