Poets are wont to write about the blackthorn as it begins to bloom in late winter or early spring, particularly in connection with the chill winds that accompany the turning of the year.  Straddling the seasons, the blackthorn bears winter's bleakness, while at the same time hinting of spring.  A precursor of the crocus. 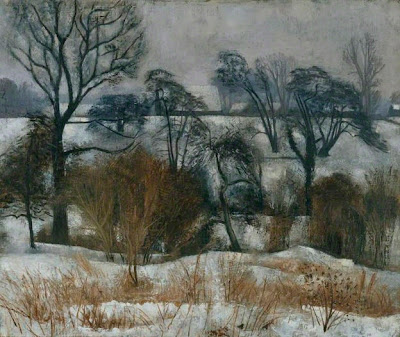 A cold wind stirs the blackthorn
To burgeon and to blow,
Besprinkling half-green hedges
With flakes and sprays of snow.

Thro' coldness and thro' keenness,
Dear hearts, take comfort so:
Somewhere or other doubtless
These make the blackthorn blow.

Christina Rossetti, Verses (1893).  "Blow" in this instance means to blossom or to bloom.

With its suggestion that "coldness" and "keenness" and "hardness" will eventually give way to reawakening and growth, "Endure Hardness" is reminiscent of Rossetti's "There Is a Budding Morrow in Midnight," which I have posted here previously.  Here are the last three lines of that poem:

For a future buds in everything;
Grown, or blown,
Or about to break. 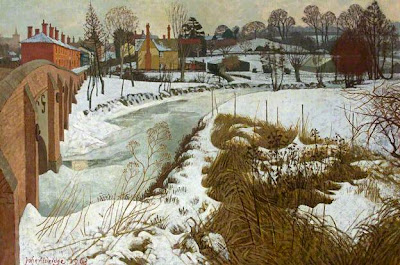 The resemblance of blackthorn blossoms to snow recurs in the following poem by Michael Longley.

A bouquet for my fifties, these flowers without leaves
Like easter snow, hailstones clustering at dayligone --
From the difficult thicket a walking stick in bloom, then
Astringency, the blackthorn and its smoky plum.

In a note, Longley indicates that "dayligone" (line 2) is a "Scots (or Ulster Scots)" word which means "twilight, dusk."  Ibid, page 68.  The word "easter" (line 2) is not capitalized in the original. 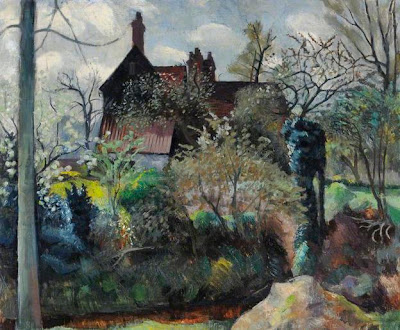 Dear Stephen,
Yours is the first site I go to after I read my emails. I want to thank you for the pleasure you bring to your readers.

Among poems that speak about harbingers of the coming Spring I love Richard Wilbur’s poem “April 5, 1974”. The poem’s closing couplet is a memory keeper as is, of course, Shelley’s closing couplet from “Ode to the West Wind”:

“The trumpet of a prophecy! O Wind,
If Winter comes, can Spring be far behind?”

The air was soft, the ground still cold .
In the dull pasture where I strolled
Was something I could not believe.
Dead grass appeared to slide and heave,
Though still too frozen-flat to stir,
And rocks to twitch, and all to blur.
What was this rippling of the land?
Was matter getting out of hand
And making free with natural law?
I stopped and blinked, and then I saw
A fact as eerie as a dream.
There was a subtle flood of steam
Moving upon the face of things.
It came from standing pools of springs.
And what of snow was still around;
It came of winter's giving ground
So that the freeze was coming out,
As when a set mind, blessed by doubt,
Relaxes into mother-wit.
Flowers, I said, will come of it.

My parents are visiting from Cornwall where they live in a very remote valley. My father listened to my mother tell me enthusiastically about the snowdrops and other signs of spring and then said gloomily 'There's still time for a Blackthorn Winter'. It was a phrase that I had not heard before but chimes perfectly with your post today.

Mr. Oberman: thank you very much for the poem by Wilbur -- I am not as familiar with his poetry as I ought to be, and I appreciate your sharing it. The final lines are indeed lovely (and memorable). I can't help but hear a trace of Frost (no pun intended!) in the final line.

Thank you for stopping by again, and for the kind words about the blog. I am very fortunate to have readers such as yourself find your way here.

alice c: as ever, it is good to hear from you. As it turns out, your anecdote is serendipitous: I was planning to include a poem by Charles Tomlinson titled "Blackthorn Winter" in my next post! A nice coincidence, isn't it?

By the way, in the American South, they use the term "blackberry winter" for a sudden cold snap in the spring. Not being from the South, I first encountered the phrase long ago when I read a short story by Robert Penn Warren with that title.

I thank you (and your father) for that piece of information.

John Aldridge captures the spirit of winter so well.

acornmoon: yes, the grey light in "Winter" and the yellow light in "Bridge, February" are very evocative, aren't they? Chilly, but beautiful.

It's good to hear from you again. Thanks for visiting.

February 2013 ...J.C.Squire...a name I had not thought of in almost a lifetime..we children had to recite "Sonnet" out loud in class...that's all I knew about him as we quickly moved on to other poets and writers...how delightful to come upon him here, to bring instantly back great childhood memories and to learn he wrote lots more than one poem...thank you so much..

Francesca: thank you very much for stopping by again, and for your thoughts.

You had a fortunate childhood! I wish that we had been required to recite Squire's Sonnet (or any poetry, for that matter!) in the schools that I attended. I'm delighted that the post brought back these memories for you, and that you have now discovered something else by Squire.