My previous post, which included two four-line poems by Edward Thomas and Michael Longley, got me to thinking about four-line poems in general. There are, in fact, quite a few fine quatrain poems in English.

Perhaps the four-line poem can be thought of as the artistic equivalent, in English, of the Japanese haiku.   A haiku consists of 17 syllables written in three lines (although it can be written in one line).  I know just enough Japanese to be dangerous.  However, I am going to go out on a limb and suggest that Japanese is more concise than English.  A great deal more can be accomplished in 17 Japanese syllables than in 17 English syllables. Hence, English speakers need one more line, and many more syllables, than the Japanese do to create a memorable short poem.

The following poem by James Reeves has been a favorite of mine for a couple of decades.  It becomes more resonant (and more insistent) with each passing year. 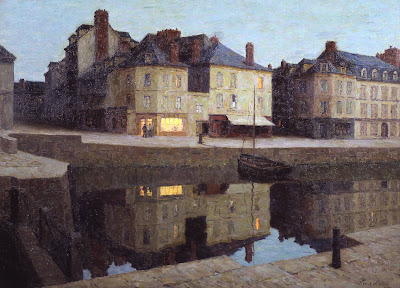 The shadow of a fat man in the moonlight
Precedes me on the road down which I go;
And should I turn and run, he would pursue me:
This is the man whom I must get to know.

Now, I am not about to suggest that there is a "formula" for a successful four-line poem.  But one thing is clear:  the poet must get to the point. Staying away from adjectives is a good idea.  Precise images are also a good idea.

As one might expect, the fourth line is crucial.  I would not say that it has to contain a surprise or a twist.  Nor would I say that it has to tie things up neatly.  In poetry, ineffability -- as opposed to obscurity -- is always a good thing.  I never like to begin a sentence:  This poem is about . . .

But I would say that the final line should, while being of a piece with the first three lines, make a turn (I cannot come up with a better word at the moment) that causes a "click" in the reader.  The "click" is, yes, ineffable. 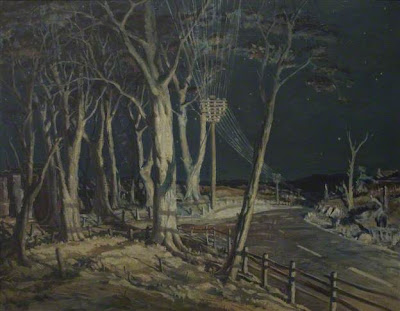 One of the best (an archtypical theme) and well-known early poems of English literature is a four-line poem:

Westron wind, when will thou blow?
The small rain down can rain.
Christ, that my love were in my arms,
And I in my bed again.

Intersting piece, and of course the haiku too is sparing in its language and often ends with an epiphany of sorts and yet is in keeping somehow with what precedes it.

Mr. Floyd: Thank you for thinking of "Westron wind . . ." It is a sort of precursor of many things, isn't it?

It's good to hear from you again. Thanks for stopping by.

Danish dog: I agree. It is difficult to describe how a haiku by a master such as Basho works, isn't it? As you suggest, it may end with an "epiphany of sorts," but the entire haiku (a good one) is a single moment of . . . what? Awareness/realizing/seeing (and more) rolled into one? As you imply, our English word "epiphany" may not be adequate to describe what happens. And, of course, there is often a Buddhist and/or Taoist element at work as well.

As always, I appreciate hearing your thoughts. Thank you for visiting again.

I've just been catching up with your last week's posts. What a delight on a bright, cold Sunday afternoon! Stunning picture of a night scene in car headlamps by Thomas Train - again, unknown to me . SO much to discover ...

A favourite BBC radio programme of mine is Poetry Please (can you get the 'Listen Again' iPlayer in the USA - it's on the BBC website)? I was listening today to Liz Lochhead, the Scottish Makar - the national poet - and she too mentioned the Western Wynde poem - contributed by Bruce - ("the most heart-breaking poem in the world") - a nice coincidence which has prompted me to write.

Your scanning for the first crocus of spring made me smile - ours are just out and the honeybees are already on them - at least while the sun shines.

Good to share the poetry - and the seasons with you.

Eamonn: it's very nice to hear from you again.

I saw my first crocuses this past week as well: purple and yellow. Too cold and grey for bees here, though.

I stumbled across the painting by Thomas Train, who I hadn't heard of before. The only other works by him I could find are portraits. But "Headlights" is quite nice, isn't it? As I noted here recently, it is the poem, not the poet, that matters. Likewise, it is the painting, not the painter, that matters. A painting like "Headlights" is likely to stay with you once you have seen it.

Thank you for the BBC recommendation. I have tried to listen to BBC radio programs before, but I have gotten a "not available in your region" message. But I am going to try again. Perhaps, as you say, I simply need to download the iPlayer.

As ever, thank you very much for stopping by, and for your comments.