The Commonplace: Two Variations On A Theme

"Poetry and Commonplace" is the title of the Warton Lecture on English Poetry delivered by John Bailey in 1919.  I've grown fond of the lecture, no doubt because it accords with my own views on the nature of poetry.  To wit:

"One of the functions of poetry is just this, to discover the life that lies concealed in what are called commonplaces . . . to take a platitude and make of it an aphorism:  to rub off the accumulated rust of time and familiarity which prevents our seeing the fresh and vital truth underneath: to speak of a mother's love, or of the sadness of autumn, in such a way that we may feel them as we may suppose them to have been felt by those who first put such feelings into words, words which for them were as fresh and forcible as the feelings, but have now for us become stale and lifeless."

Some of you may say:  "Well, that's obvious."  My response is:  "I'm thick-headed and I need to be reminded of these things."  Others may say: "What about the avant-garde, and the overthrowing of long-established, stale traditions?  Isn't that the function of art?"  My response (yawning) is: "Nothing is more hackneyed, conformist, and unimaginative than the latest iteration of the avant-garde."  Finally, some may say:  "What about 'the poetry of witness,' poetry that addresses the burning issues of the day?"  My response (again, yawning) is (and you have heard this here before):  "Political poetry is an oxymoron." 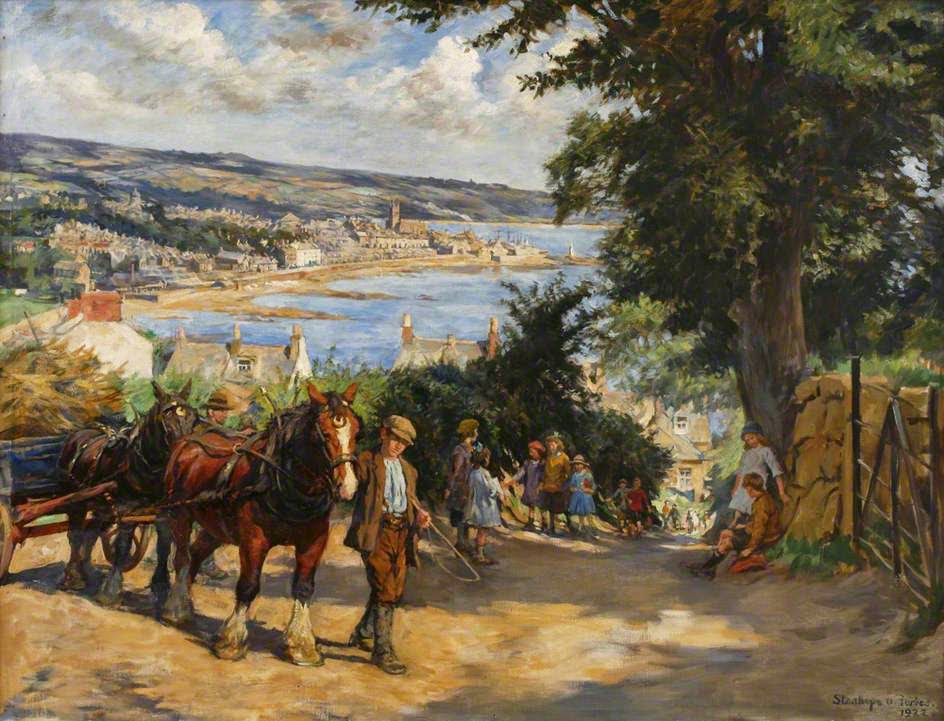 Bailey gives this as an example of a poem that transforms an ostensibly "trivial" moment into something else entirely.

At the corner of Wood Street, when daylight appears,
There's a thrush that sings loud, it has sung for three years:
Poor Susan has passed by the spot, and has heard
In the silence of morning the song of the bird.

'Tis a note of enchantment; what ails her?  She sees
A mountain ascending, a vision of trees;
Bright volumes of vapour through Lothbury glide,
And a river flows on through the vale of Cheapside.

Green pastures she views in the midst of the dale,
Down which she so often has tripped with her pail;
And a single small cottage, a nest like a dove's,
The one only dwelling on earth that she loves.

She looks, and her heart is in Heaven: but they fade,
The mist and the river, the hill and the shade;
The stream will not flow, and the hill will not rise,
And the colours have all passed away from her eyes.

William Wordsworth, Lyrical Ballads, with Pastoral and Other Poems (1802).

"The essential business of Wordsworth was to make a primrose by a river's brim [a reference to "Peter Bell"] more than that to every one who reads:  to bring out the strangeness of the common, the interestingness and newness and significance of the commonplace." 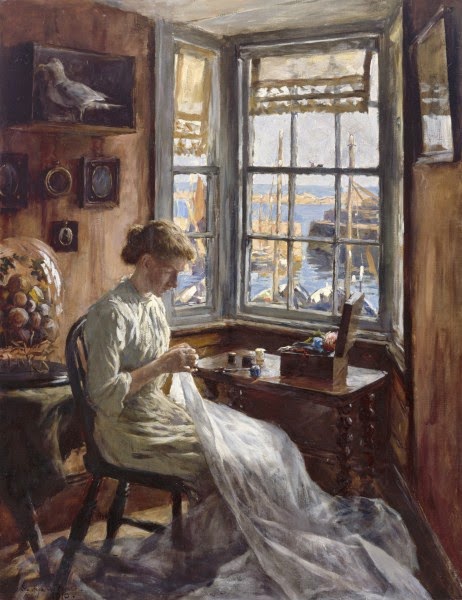 Given his confident (is grandiose too strong a word?) view of himself, and his interest in big (and often eccentric) ideas, one would not expect W. B. Yeats to dwell upon the commonplace in his poetry.  But, if "Poor Susan" is about the commonplace, what are we to make of this lovely echo?

W. B. Yeats, The Countess Kathleen and Various Legends and Lyrics (1893).

Please rest assured that I am not out to make sport of Yeats (although his personal quiddities are entertaining):  he is a great poet.  And I have previously written fondly of "The Lake Isle of Innisfree."  I am merely suggesting (following Bailey's cue) that both Yeats and Wordsworth are at their best when they transform the commonplace, rather than travelling off, untethered, into the upper air (as they were both wont to do). 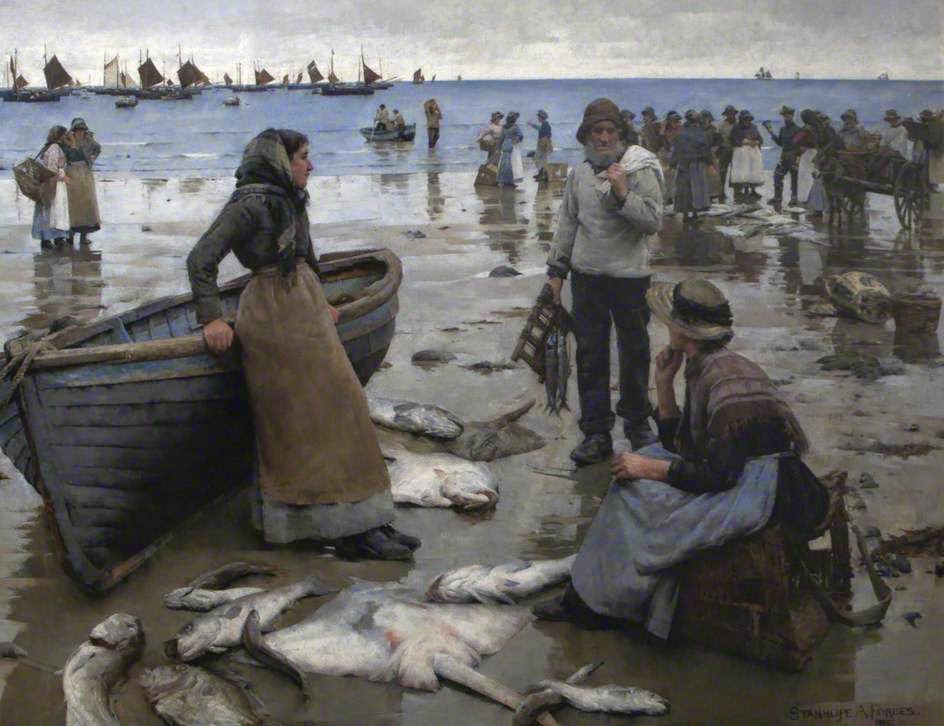 "Poetry has, it would rather seem, two functions with regard to truth:  its discovery and its re-discovery.  The great poet, that is, is sometimes creating and inventing, giving us new thoughts or pictures; and sometimes restating old ones in such a way that it appears as if we were hearing them for the first time.  His originality is of this double kind; an originality of substance and an originality of form.  The one originates something new, the other re-creates something old."

I'm old-fashioned:  I like it when "truth" is mentioned in connection with poetry. 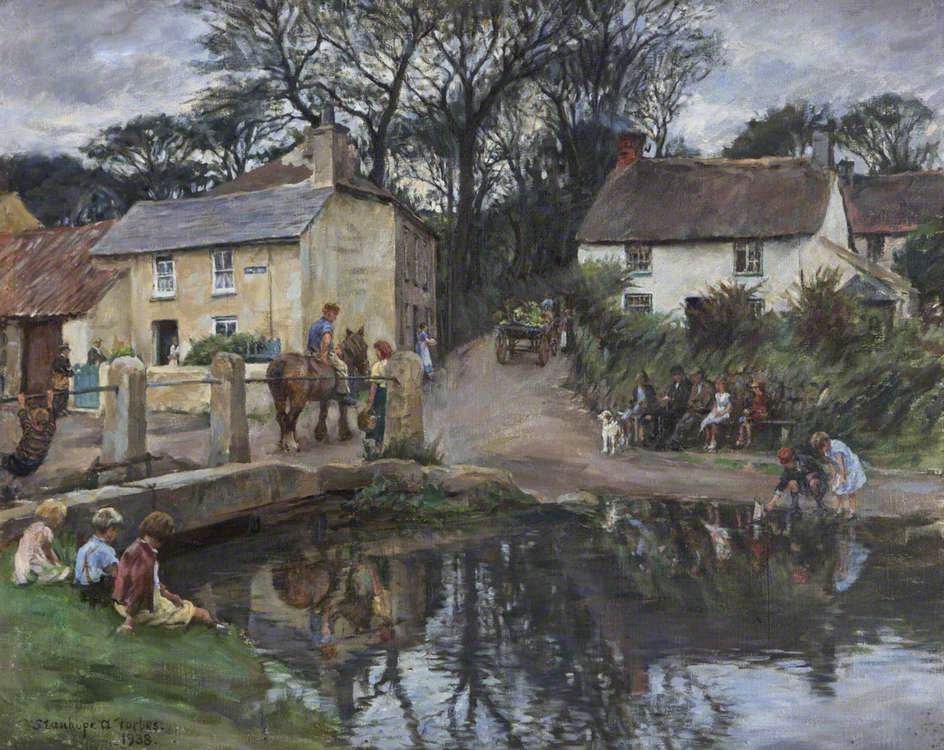 Seamus Heaney in the introduction of his book "The Redress of Poetry," addresses how poetry can transform the everyday world into something fresh and new. Heaney speaks of "the frontier of writing," which is, he says, "the line that divides the actual conditions of daily lives from the imaginative representation of those conditions in literature, and divides also the world of social speech from the world of poetic language."

Heaney says that this "dividing line is the real subject of Thomas Hardy's . . . poem 'Afterwards." Hardy might have intended to write a poem about his fated departure "from the familiar world, but his ultimate achievement was to transform the familiar world into something rich and strange."

The social response to the news of death consists of "the conventional decencies." But the poem ultimately is about how an imagined response can transcend the social response and cross the "frontier," into a new dimension.

In short, in an imagined scene, instead of the usual platitudes about death, one can ask, "He was a man who used to notice such things." Another says, "Which things?" The poem tells us which things, all of them everyday things: the coming of the month of may, the seeping in of dusk, the hawk perching "Upon the wind-warped upland thorn," a winter night choked with stars.

To which, the questioner says, "My God!" Yes, we all should notice such things, see them in a different way.

"The poem, in fact, is a showing forth of the way that poetry bring human existence into a fuller life."

Speaking of Frost's poem "Directive, though Heaney's words apply to Hardy's poem as well, Heaney says, "The poem provides a draught of the clear water of transformed understanding and fills the reader with a momentary sense of freedom and wholeness."

It was Blake who said we must see through the eye, not with it. When we apply poetic imagination to everyday life, the quotidian unfolding before us, we "see" it in a different way and what we superficially thought to be commonplace is, in truth, rich and mysterious, and for a moment the mundane world is nimbused with startling brightness and wonder.

When the Present has latched its postern behind my tremulous stay,
And the May month flaps its glad green leaves like wings,
Delicate-filmed as new-spun silk, will the neighbours say,
'He was a man who used to notice such things'?

If it be in the dusk when, like an eyelid's soundless blink,
The dewfall-hawk comes crossing the shades to alight
Upon the wind-warped upland thorn, a gazer may think,
'To him this must have been a familiar sight.'

If I pass during some nocturnal blackness, mothy and warm,
When the hedgehog travels furtively over the lawn,
One may say, 'He strove that such innocent creatures should come to no harm,
But he could do little for them; and now he is gone.'

If, when hearing that I have been stilled at last, they stand at the door,
Watching the full-starred heavens that winter sees
Will this thought rise on those who will meet my face no more,
'He was one who had an eye for such mysteries'?

And will any say when my bell of quittance is heard in the gloom
And a crossing breeze cuts a pause in its outrollings,
Till they rise again, as they were a new bell's boom,
'He hears it not now, but used to notice such things'?

Anonymous: thank you very much for all of this -- which leaves me not knowing where to begin.

Heaney's prose writings on poetry are always full of good common sense, aren't they? He always seems to get to the heart of the matter in a jargon-free, theory-free way. Poetic criticism of his sort has always been in short supply, particularly in this century and in the latter half of the twentieth century. One feels that, apart from being right, he is moved by love and passion for poetry, which often seem wanting in most critical writing.

It is wonderful that he writes of "Afterwards" in the way he does. It is a marvelous poem, and one that I have been meaning to post here at some point. I'm pleased that you have done so.

Thanks again for sharing your thoughts, and for the Heaney, Hardy, and Frost.