I am a slow reader.  When I hear someone say they finished reading a novel last week, I am impressed.  All I can say in response is that I read a few poems last week.  In saying this, I don't intend to sound precious or pedantic.  It's simply the ways things have worked out.

As I have suggested before, a poem -- like a painting -- needs time to develop.  In repose.  I have never been one to rush through art museums: looking at too many paintings makes my head spin.  Likewise with poetry: I don't see the point in reading wide swathes of poetry at a time.  One poem per sitting is my rule of thumb -- even for two-line poems.

Reading poetry is a perambulation, not a race.  Thus, for instance, I continue to leisurely work my way through the poems of Walter de la Mare, discovering small gems.

Never more, Sailor,
Shalt thou be
Tossed on the wind-ridden,
Restless sea.
Its tides may labour;
All the world
Shake 'neath that weight
Of waters hurled:
But its whole shock
Can only stir
Thy dust to a quiet
Even quieter.
Thou mock'st at land
Who now art come
To such a small
And shallow home;
Yet bore the sea
Full many a care
For bones that once
A sailor's were.
And though the grave's
Deep soundlessness
Thy once sea-deafened
Ear distress,
No robin ever
On the deep
Hopped with his song
To haunt thy sleep.

Of course, countless poems have been written about seafarers coming to rest at last on land, there to spend eternity.  "Home is the sailor, home from sea . . ."  Et cetera.

Ah, yes, but what about this?

No robin ever
On the deep
Hopped with his song
To haunt thy sleep.

I could not read those four lines and then move on straightaway to another poem.  I needed a day or so to let them rest, and quietly revolve, in my mind. I fell to sleep remembering them.  I am certainly not recommending this approach for everyone.  Others are no doubt more industrious, and out for bigger game.  I prefer daydreaming as I wander down by-ways. 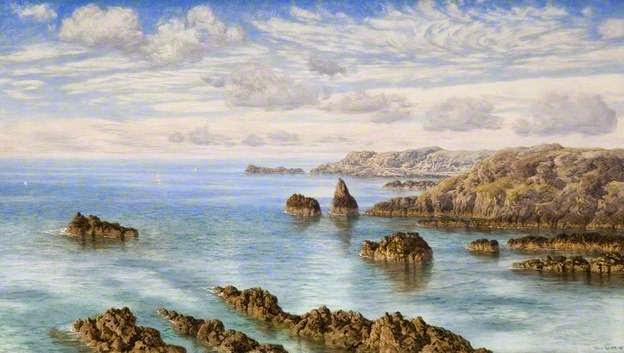 If we let poems take their time, detours and diversions may offer themselves up.  De la Mare's sailor home from the sea got me to thinking of the numerous wonderful poems in The Greek Anthology about the sea-side graves of mariners.  For instance:

Though smiling calms should smooth the glassy seas,
Or the light ruffling of the western breeze
Should skim their surface, with no venturous prow
Will I the dreary waste of waters plough.
By sad experience warn'd I tempt no more
The swelling billows and the tempest's roar.

Hail, shipwreck'd corse!  accuse not from the grave,
The ocean, but the winds, that wrought thy doom:
They wreck'd thee; while the gentle salt-sea wave
Bore thee to land, to thy parental tomb.

This is a sailor's, that a peasant's tomb:
'Neath sea and land there lurks one common doom.

And what of that lovely robin, haunting (peacefully) the sleep of the sailor? I was reminded of a wonderful poem by Robert Herrick that appeared here in May.

Laid out for dead, let thy last kindness be
With leaves and moss-work for to cover me:
And while the Wood-nymphs my cold corpse inter,
Sing thou my Dirge, sweet-warbling Chorister!
For Epitaph, in Foliage, next write this:
Here, here the Tomb of Robin Herrick is.

And so a simple poem led to a nice stroll, a stroll during which our frenetic modern world was entirely absent.  Have no fear!  It will still be there when you return. 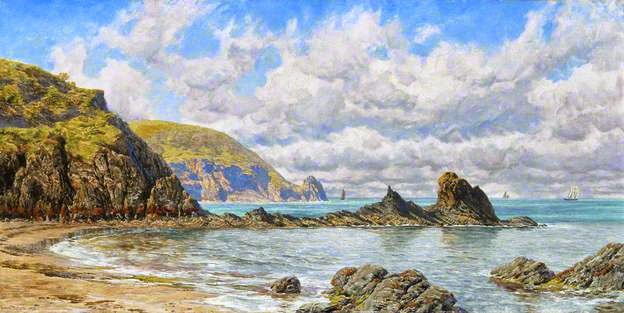 I wholeheartedly endorse what you say here. I too am a slow reader, probably slower than I used to be if I'm honest, but happily so. I like to read a poem slowly, and I think good poems deserve this.
There are times when I do not even complete the poem, a few lines and I may also be off wandering down quiet byways.
I try to keep to this rule even when reading a novel and will often read only a few pages before putting the book down and musing upon what I've read.
I very much like this line of yours "Reading poetry is a perambulation, not a race."

When I walk I like to saunter and wander off of the path, perhaps dawdle a little too. After all I'm not engaged in a route march, but as you say a gentle stroll out of this noisy and increasingly difficult to escape, busy modern world.
I've always liked these words by the writer, Wendell Berry;
" We can stop for a while, if we try hard enough. If we are lucky , we can sit still."
It's delightful to see Walter De La Mare here again, I've rather neglected him of late, I must open his Complete Poems again before too much more time passes.

A few days ago I read in Joseph Conrad's "The Mirror of the Sea," and I marked the below passage for it's beauty--and its truth wrung from the great mind of Conrad and sifted into superb prose. It's a sheer coincidence we were both reading about the sea, of men's fascination with it.


Conrad's fascination with the sea, his keen, unvarnished assessment of it, the huge mindless creature relentlessly and restlessly tossing, dispensing beauty and cruelty, both with utter indifference, links to your latest posting--or am I dreaming and finding congruence where, perhaps none exists?


For all that has been said of the love that certain natures (on shore) have professed to feel for it, for all the celebrations it had been the object of in prose and song, the sea has never been friendly to man. At most it has been the accomplice of human restlessness, and playing the part of dangerous abettor of worldwide ambitions. Faithful to no race after the manner of the kindly earth, receiving no impress from valor and toil and self-sacrifice, recognizing no finality of dominion, the sea has never adopted the cause of its masters like those lands where the victorious nations of mankind have taken root, rocking their cradles and setting up their gravestones. He—man or people—who, putting his trust in the friendship of the sea, neglects the strength and cunning of his right hand, is a fool! As if it were too great, too mighty for common virtues, the ocean has no compassion, no faith, no law, no memory. Its fickleness is to be held true to men’s purposes only by an undaunted resolution, and by a sleepless, armed, jealous vigilance, in which, perhaps, there has always been more hate than love. Odi et amo may well be the confession of our fascination of the sea. All the tempestuous passions of mankind’s young days, the love of loot and the love of glory, the love of adventure and the love of danger, with the great love of the unknown and vast dreams of dominion and power, have passed like images reflected from a mirror, leaving no record upon the mysterious face of the sea. Impenetrable and heartless, the sea has given nothing of itself to the suitors for its precarious favors. Unlike the earth, it cannot be subjugated at any cost of patience and toil. For all its fascination that has lured so many to a violent death, its immensity has never been loved as the mountains, the plains, the desert itself, have been loved. Indeed, I suspect that, leaving aside the protestations and tributes of writers who, one is safe in saying, care for little else in the world than the rhythm of their lines and the cadence of their phrase, the love of the sea, to which some men and nations confess so readily, is a complex sentiment wherein pride enters for much, necessity for not a little, and the love of ships—the untiring servants of our hopes and our self-esteem—for the best and most genuine part. For the hundreds who have reviled the sea, beginning with Shakespeare in the line, “More fell than hunger, anguish, or the sea,” down to the last obscure sea dog of the “old model,” having but few words and still fewer thoughts, there could not be found, I believe, one sailor who has ever coupled a curse with the good or bad name of a ship. If ever his profanity, provoked by the hardships of the sea, went so far as to touch his ship, it would be lightly, as a hand may without sin be laid in the way of kindness on a woman.

Mr Ashton: it's good to hear from you again.

I think that age may have something to do with slow reading, but -- I hope! -- not from diminishing powers, but rather from a desire to derive greater pleasure. Or perhaps I am just rationalizing! But my experience is the same as yours. I often have to consciously slow myself down on walks, and not, as you say, turn them into "a route march."

As we have discussed before, de la Mare always provides nice surprises, doesn't he? I'm like you: I find that I neglect his poetry when I ought not to.

Anonymous: thank you very much for the passage from Conrad, which is new to me. It is a wonderful meditation on the essential impassivity and strangeness of, yet the simultaneous allure of, the sea. Not being a mariner of any sort, I prefer to live along the shore.

Now you have me reaching for a volume of his short works, where I come across this in "Youth": "Youth and the sea. Glamour and the sea! The good, strong sea, the salt, bitter sea, that could whisper to you and roar at you and knock your breath out of you." Nobody has written better of the sea, have they? I'll go out on a limb and say that Conrad even has Melville beat on that score.

Mr Pentz, As a follow on to this post.
I don't know if you have ever looked at the official website of the Walter De La Mare Society.

I drop by myself from time to time, and as a result of your posting here I visited yesterday evening and noticed two interesting articles. One by John Gray and another by Richard Hawking.The first I have read, the second, being much longer I have printed for myself and shall look forward to reading over the coming weekend. I hope you don't mind me passing this information on, I thought it might be of interest to you.

Mr Ashton: thank you for reminding me of that site. I was aware of it, but I haven't visited it for a while. Hawking's essay on de la Mare's poetry (which you have probably already discovered -- if not, you may find it by clicking on "Research Database" and then clicking on "Critical Studies") is also very good.

Rose: thank you very much for the kind words. I'm happy that you found your way here, and I hope that you will return often. Thank you again.