"The Drowsy Motion Of The River R"

As we have seen in "The River of Rivers in Connecticut," Wallace Stevens speaks of the World as a river -- "an unnamed flowing."  Of course, this idea is certainly not one that is unique to Stevens.  But, for Stevens, the flowing of the World means nothing unless the Imagination is applied to it.  Thus, Life consists of two motions:  the motion of the World and the motion of the Imagination.  Perhaps this is expressed best in the title of one of Stevens's late poems:  "Reality Is an Activity of the Most August Imagination."

Whew!  How's that for some high-falutin' talk?  I don't know what got into me.  Enough palaver.  The only thing that matters is the poetry.  To wit:

The two worlds are asleep, are sleeping, now.
A dumb sense possesses them in a kind of solemnity.

The self and the earth -- your thoughts, your feelings,
Your beliefs and disbeliefs, your whole peculiar plot;

The redness of your reddish chestnut trees,
The river motion, the drowsy motion of the river R. 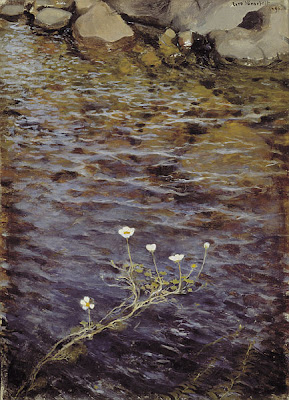 And, on the subject of motion, consider this:

The Place of the Solitaires

Let the place of the solitaires
Be a place of perpetual undulation.

Whether it be in mid-sea
On the dark, green water-wheel,
Or on the beaches,
There must be no cessation
Of motion, or of the noise of motion,
The renewal of noise
And manifold continuation;
And, most, of the motion of thought
And its restless iteration,

In the place of the solitaires,
Which is to be a place of perpetual undulation. 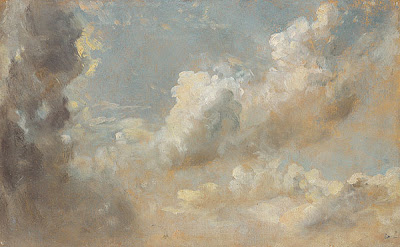 Nothing tedious here. You exactly pull the two threads out, and let Stevens merge them together again. Word and Image. The effect is quite magnificent -- especially with the Stevensesque pictures thrown in.

I assume the two worlds are self and earth, and that they only awaken to their true worth under the influence of imagination.

From whence comes the "dumb sense?" And deaf, mute, blind, and unfeeling (I presume), how are we to connect solemnity to dumb sense?

A lovely poem. I'm a sucker for rivers. And peacocks! Whether they occur in Stevens or O'Connor...

Thank you for dropping by again, Mr. Sigler. And, as always, thank you very much for the kind words.

Kevin: Thank you very much for visiting and commenting again.

I'm pleased that you like 'An Old Man Asleep.' Stevens often puzzles me, so I appreciate your thoughts on the poem. As for the connection between 'dumb sense' and 'solemnity,' I too am unsure -- but, as is usually the case with Stevens, it sounds beautiful, so I am content with the ambiguity.