In the third stanza of "Desert Places," Robert Frost writes:

Not surprisingly, these lines often prompt comparisons with Wallace Stevens's "The Snow Man" -- and not merely on account of the snow.

I still find it hard to credit, but I first encountered "The Snow Man" in a high school literature textbook when I was 14 or 15 years old.  (The fact that it was even in the textbook amazes me:  did the editors have a misguided notion of the capabilities of American youth?  Or, in those faraway days, did they harbor grandiose hopes for the future of literature in this fair land?)  For some unaccountable reason, I recall that the poem was accompanied by an illustration of a jaunty snow man with the usual stove-pipe hat, wool scarf, coal lumps for eyes, and a carrot for a nose.  Of course, I had no idea what the poem was about. 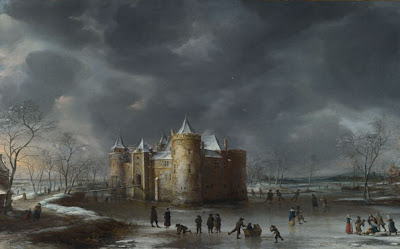 Jan Beerstraaten, "The Castle of Muiden in Winter" (1658)

What does it mean?  Here is what Stevens said:  "I shall explain The Snow Man as an example of the necessity of identifying oneself with reality in order to understand it and enjoy it."  Letter from Wallace Stevens to Hi Simons, April 18, 1944, Letters of Wallace Stevens (1966), page 464.  I take this statement with a grain of salt.  After all, Stevens also said:  "I have the greatest dislike for explanations.  As soon as people are perfectly sure of a poem they are just as likely as not to have no further interest in it; it loses whatever potency it had."  Letter from Wallace Stevens to Ronald Lane Latimer, November 15, 1935, Letters of Wallace Stevens, page 294.

Maybe it is best to approach the poem from another angle entirely.  Here is something that Ludwig Wittgenstein wrote some time before Stevens wrote "The Snow Man":

The sense of the world must lie outside the world.  In the world everything is as it is, and everything happens as it does happen:  in it no value exists -- and if it did exist, it would have no value.

Ludwig Wittgenstein, Tractatus Logico-Philosophicus, Proposition 6.41 (1921) (translated by D. F. Pears and B. F. McGuinness; emphasis in original).  Or perhaps it boils down to the final Proposition of the Tractatus:  "What we cannot speak about we must pass over in silence."  Or, translated differently:  "Whereof one cannot speak, thereof one must be silent."
Posted by Stephen Pentz at 12:20 AM

I was introduced to this blog by Anecdotal Evidence and have been following you nearly every day for the past months. Thank you for the enjoyment it has given me.

This morning, feeling the crush of the Christmas season, I felt my head beginning to hurt and went to my office to pull The Palm at the End of the Mind off the shelf. I turned to this poem for several moments before spending several more with the blackbirds. I felt better immediately.

Then I get on the internet for my morning ritual of Anecdotal, Commonplace, First Known, etc., and find this reinforcement.

It is nice to have this kind of conversation with you guys, even if I am only a silent participant.

"The sense of the world must lie outside the world. In the world everything is as it is, and everything happens as it does happen: in it no value exists -- and if it did exist, it would have no value."

Interesting. It appears that Stevens disagrees with W's sentiment: the sense of the world is discovered in the world, in one's active participation, or one's understanding and enjoyment of it.

In any event, I'm immensely grateful that poets and novelists refuse to pass over in silence those experiences that are ineffable and so bloody difficult to write about.

A particularly fine post, Mr. Pentz. A nice solstice present to see Frost and Stevens playing in the snow, back to their natural element from the turbulence of Key West. But the Wittgenstein/Stevens connection is more welcome, one that few scholars even have gotten hip to. Brilliant use of a Tractatus quote to illuminate that inscrutable last line of "The Snow Man." It makes my thinking cap hurt, truth be told.

Mr. Bauer: Thank you very much for visiting, and for the kind comments. I like the coincidence that we were both thinking of Stevens. I'm privileged to be able to share what I like with others, and I am always pleased to discover that others share similar feelings.

Thank you for visiting and commenting again, Kevin.

As for passing over things in silence, Wittgenstein didn't exactly follow his own advice. Which reminds me of Po Chu-i's poem "Lao-Tzu":

"Those who speak know nothing;
Those who know are silent."
Those words, I am told,
Were spoken by Lao-Tzu.
If we are to believe that Lao-Tzu
Was himself one who knew,
How comes it that he wrote a book
Of five thousand words?

(The translation is by Arthur Waley.)

Mr. Sigler: Thank you very much for the kind words.

Yes, the Wittgenstein quote (like much of what he wrote) "makes my thinking cap hurt" as well.

As for my use of the Tractatus quote being "brilliant": I am greatly appreciative of the compliment, of course, but I fear that pulling in Wittgenstein is merely a case of too much desultory reading, coupled with a quixotic effort to make some sort of sense of it all!

I, too, struggle with the last line of this poem that is one of my favorities. Thank you for the quote from Stevens about reality. I'll take he was genuine when he said it. I'll also believe Stevens had a sense of vulnerability as a poet.

The first part of the line appears as "take things as they are" to my ear. This concords with indentifying with nature as it is. The second part, "the nothing that is" perhaps suggests a looking deeper at what nothing may be. Of course Lao Tzu feels right, but I do not know enough about Stevens to say this may be so.

The Wittgenstein quote addresses the first part of the line, but not the last. It also adds a commentary on value which may or may not relate to the poem. I think the quote sort of hits the nail obliquely.

My sense is this poem is about waiting for the poem to arrive so it may be written. That, indeed, can be a very lonely place. I like the earlier quote from Frost. Frost wrote about writing poetry and the connection maybe real in the sense these two giants were concerned with similar themes.

Mr. Wright: thank you very much for visiting and commenting.

I'm not sure that it is merely a poem about writing poetry, however. Although Stevens's vehicle for exploring and enhancing reality was poetry, I think that his concern was with the way all of us (poets or not) can use the imagination to explore and understand (as much as that is possible) the world.