A Larkin Snow Poem: "Your Life Walking Into Mine"

One perhaps does not expect a snow poem by Philip Larkin to be a metaphysical meditation along the lines of Robert Frost's "Desert Places" or Wallace Stevens's "The Snow Man."  This is certainly not a criticism of Larkin (who can be, at times, as metaphysical as they come):  it simply means that his meditations tend to stay closer to home -- they usually have something to do with getting through the day.  Which is no small thing.

Larkin wrote the following poem on February 1, 1976.  It is untitled.

Morning at last: there in the snow
Your small blunt footprints come and go.
Night has left no more to show,

Not the candle, half-drunk wine,
Or touching joy; only this sign
Of your life walking into mine.

But when they vanish with the rain
What morning woke to will remain,
Whether as happiness or pain. 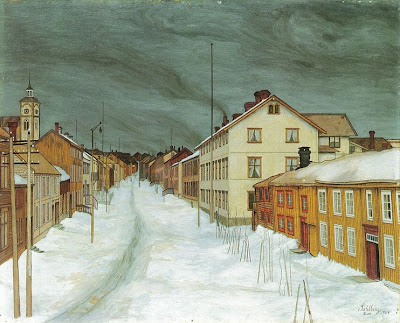 I've read your last two posts and their excellent poems a good few times trying to nail down what I think of them and, despite your burgeoning apprehension, I'm now ready to share my knowledge with the world.

It's almost as if Stevens, despite being of one with it all, is still only looking at what Frost has found himself in. And as for Larkin, well, he's smoking a cigarette looking at Stevens looking at Frost.

Thanks for posting such interesting material. I'm going to have a lie-down now.

But 'Whether as happiness or pain' is very characteristic of Larkin. Have a very Happy Christmas. I look forward to reading more of your poetry selections and seeing your beautiful illustration choices in the coming year.

Much to my delight, I've been reading your reflections since you began your blog early this year. I've also enjoyed the paintings that you've included. I owe you all my good words and hope that you will continue for a long, long time.

And, too, I've enjoyed your philosophical observations. ('Will you walk into my parlor, said the Philosopher to the fly', from Philosophical Essays by O.K. Bouwsma)

Thank you for dropping by again, pomposa.

I like your thoughts on the three poets. I agree that, for all of his posturing and leg-pulling, Frost was -- of the three -- the one who was, as you say, really 'in' the desert places and knew it full well.

Stevens sensed, I think, that he had been perhaps too much of an observer -- hence the line: 'I wonder, have I lived a skeleton's life' in 'First Warmth'(written in 1947, when he was 68), which later became 'As You Leave the Room.'

And Larkin: well, Larkin is Larkin. What would we do without him? 'Beneath it all, desire of oblivion runs.' Sorted.

But perhaps Wittgenstein is correct in the end: 'Silence!'

zmkc: Thank you for the kind words. I enjoyed becoming acquainted with your blog this year as well.

Yes, that is a typical Larkin outlook on things, isn't it? But, as I said in my comment in response to pomposa, 'what would we do without him?' (At any rate, that's how I feel.)

Merry Christmas to you, and thank you again for your visits.

Tim: You are very kind. Although I have said this before, it bears repeating: I started this blog solely to share my enthusiasms with others, and I have since found that the best part of doing this is meeting others who share those enthusiasms.

Thank you indeed for your generous words.

And thank you for the quote from Bouwsma! I only know him through his 'Conversations' with Wittgenstein. I need to track down his other writings.