"Gods Make Their Own Importance"

When it comes to Utopias, Max Beerbohm has the final word:

So this is Utopia, is it?  Well
I beg your pardon, I thought it was Hell.

And still some of those among us persist.  But truisms are, well, true.  For instance:  The more things change, the more things stay the same.   Thomas Hardy knew this:  "Only thin smoke without flame/From the heaps of couch-grass;/Yet this will go onward the same/Though Dynasties pass."  ("In Time of 'The Breaking of Nations'," Stanza II.)  Utopians (our modern-day scolds, nannies, and self-styled "progressives") are always ignorant (blissfully or not) of this:  "Gods make their own importance."

I have lived in important places, times
When great events were decided:  who owned
That half a rood of rock, a no-man's land
Surrounded by our pitchfork-armed claims.
I heard the Duffys shouting 'Damn your soul'
And old McCabe stripped to the waist, seen
Step the plot defying blue cast-steel --
'Here is the march along these iron stones.'
That was the year of the Munich bother.  Which
Was most important?  I inclined
To lose my faith in Ballyrush and Gortin
Till Homer's ghost came whispering to my mind
He said:  I made the Iliad from such
A local row.  Gods make their own importance.

Patrick Kavanagh, Come Dance With Kitty Strobling and Other Poems (1960).  According to the OED, a "rood" is "a unit of land area equal to 40 square rods (a quarter of an acre), but varying locally."  A "march" is a boundary. 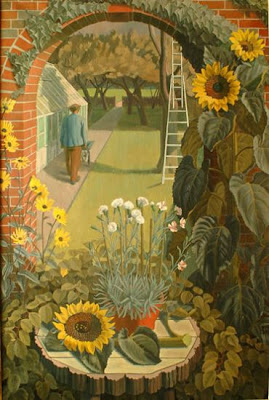 Interesting to consider, though, how much surroundings contribute to individual genius. For the most part I agree with you, but could work of lasting value be created by someone currently living in, say, Pyongyang? Societies where "progressive" ideas are allowed, no matter how ridiculous, seem to be the most artistically fertile.

Pavonine99: thank you very much for visiting, and for your comments.

Thanks again. I hope that you will return soon.