These lines from Philip Larkin's "The Trees" return each year:  "Yet still the unresting castles thresh/In fullgrown thickness every May."  Here are three brief poems (the first two untitled) on the same theme.

When all the reeds are swaying in the wind
How can you tell which reeds the otters bend? 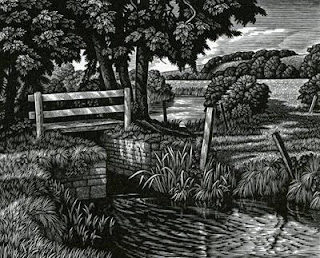 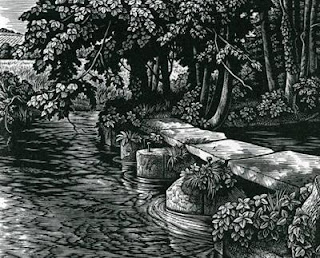 I fall asleep to the sound of rain,
But there is no rain in the desert.
The leaves of the trader's little cottonwoods
Turn, turn in the wind. 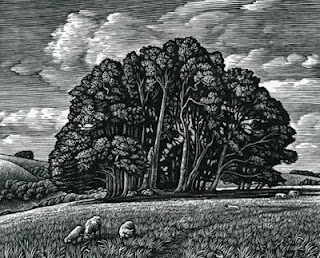 Howard Phipps, "Win Green from Berwick Down"
Posted by Stephen Pentz at 12:10 AM

Thanks.
At first they seem a very diverse set of takes on 'wind in greenery' but on closer inspection the Michael Longley couplet stands out from the others. It seems to encourage the reader to resist being drawn into the evocativeness, or the magic of the experience, but to look carefully for something real, and not obvious, an otherness (or otterness), also present in it.

And Christina Rossetti's
Who has seen the wind?
Neither you or I
But when the trees bow down their heads
The wind is passing by...

Just wanted to make sure you know there's a nice reference to you (and my comment) on The Occasional Blog.

forcheville: thank you for visiting and commenting again. I would be hard-pressed to choose my favorite among the three, but I agree with you that Longley's couplet is alluring -- it definitely has layers and layers to it. Your point is a good one, and applies as well to much of Longley's poetry: there is, as you say, an "evocativeness" there, but it is always based upon something real and particular.

Thank you, Shelley. Yes, I did come across that post on The Occasional Review, and I sent a message to Mr. Ahuja thanking him for his kindness.

I really like the images. Are they wood engravings?

Witold: thank you very much for visiting and commenting. Yes, the images are wood engravings. Mr. Phipps is one of the finest engravers in England. His views of the countryside are wonderful, aren't they? He has also made lovely engravings of the seaside and of the interiors of rooms.