"Neither Out Far Nor In Deep"

Elizabeth Bishop's sandpiper -- "looking for something, something, something" -- leads us to Robert Frost's "people along the sand."  Is the following poem cynical and misanthropic?  Or is it a wistful reflection on our shared human predicament?  Or is it both?  (Frost, I suspect, would prefer to have it both ways.)

Neither Out Far Nor In Deep

The people along the sand
All turn and look one way.
They turn their back on the land.
They look at the sea all day.

As long as it takes to pass
A ship keeps raising its hull;
The wetter ground like glass
Reflects a standing gull.

The land may vary more;
But wherever the truth may be --
The water comes ashore,
And the people look at the sea.

Perhaps how one feels about the poem depends upon how one's day (or life?) has gone.  Randall Jarrell, who writes wisely about Frost's poetry, has this to say about the poem:

It would be hard to find anything more unpleasant to say about people than that last stanza; but Frost doesn't say it unpleasantly -- he says it with flat ease, takes everything with something harder than contempt, more passive than acceptance.  And isn't there something heroic about the whole business, too -- something touching about our absurdity?  If the fool persisted in his folly he would become a wise man, Blake said, and we have persisted.  The tone of the last lines -- or, rather, their careful suspension between several tones, as a piece of iron can be held in the air between powerful enough magnets -- allows for this too.

William Pritchard -- another wise commentator on Frost -- holds the view that "you couldn't really know how to read the tone of the poem, because Frost had deliberately made its tone opaque, equivocal."  Howell Chickering, "Chaucer by Heart," in Under Criticism: Essays for William H. Pritchard (1998), page 92. 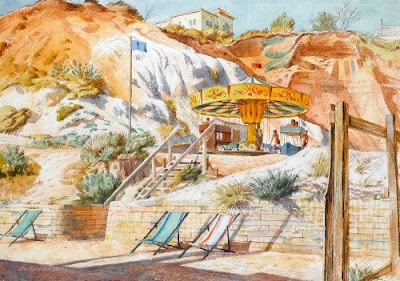 Thanks for this, Steve. Jarrell is a wonderful commentator on Frost, but this time I side with Pritchard. There is no textual reason to assume that the last stanza is at all “unpleasant” in its attitude, nor to agree with Lionel Trilling that the poem’s effects are “terrifying” and that nothing in it provides warmth “except the energy with which emptiness is perceived”. “Neither Out Far” is a brilliant exercise in withholding the evidence: it refuses to sustain the readings and reactions inspired by it.

Shelley: Thank you for visiting and commenting again. Yes, Jarrell was a fine critic, although he could be a bit harsh at times!

Tim: Thank you very much for dropping by. And thank you indeed for your insights on the contrasting views of Jarrell, Pritchard, and Trilling on the poem. Trilling was quite taken with his view of Frost's poetry as "terrifying," wasn't he?

I think that the poem, especially the last stanza, shows Frost's sense of humor. Anyway, I find it amusing.

From My Easy Chair: That is an excellent point -- Frost was a leg-puller. And finding the stanza amusing may be preferable to finding it "terrifying" (as Mr. Kendall reminds us about Trilling's view).