As I have noted before, I (like many others, I suspect) was introduced to Edward Thomas by coming across "Adlestrop" in an anthology.  Although "Adlestrop" brought me to Thomas, the following poem was the one that took my breath away -- and I immediately realized that (for me, at least) Edward Thomas would never be just another poet.  I still feel that way after about three decades.

Old at once was the house,
And I was old;
My ears were teased with the dread
Of what was foretold,

Nights of storm, days of mist, without end;
Sad days when the sun
Shone in vain:  old griefs, and griefs
Not yet begun.

All was foretold me; naught
Could I foresee;
But I learnt how the wind would sound
After these things should be.

Thomas wrote the poem in March of 1915.  The house referred to was located at Wick Green near Steep in Hampshire.  Thomas's family began living there in December of 1909.  The house was located on a hill.  Hence the wind.

How I feel about "The New House" in particular, and Thomas's poetry in general, is reflected in these words from C. H. Sisson about Thomas:

He is, without doubt, one of the most profound poets of the century.  What did he say?  He said what is in the poems, and there is no message beyond them.  But he belonged to the underside of the world, from which renewal must come, and he speaks with conviction of matters which may be touched and felt. 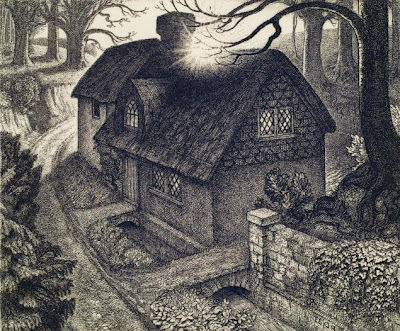