"The House Across The Way"

The line "there's masses of time yet, masses, masses . . ." from Gavin Ewart's "Yorkshiremen in Pub Gardens" brings to mind a poem by Ralph Hodgson (1871-1962) on the same subject -- what Hilaire Belloc calls "implacable fate . . . and the strumble of the hungry river of death."  Hodgson was one of the "Georgian poets," and his verse is now little remembered.  We owe Hodgson our thanks for arranging the first meeting between Robert Frost and Edward Thomas, which took place in London on October 6, 1913.  In his note to Frost setting up the meeting, Hodgson wrote:  "Edward Thomas will be up [to London] and I think you'd both like to know each other."  Very perceptive, and how fortunate for us!

The House Across the Way

The leaves looked in at the window
Of the house across the way,
At a man that had sinned like you and me
And all poor human clay.

He muttered:  "In a gambol
I took my soul astray.
But tomorrow I'll drag it back from danger,
In the morning, come what may;
For no man knows what season
He shall go his ghostly way."
And his face fell down upon the table,
And where it fell it lay.

And the wind blew under the carpet
And it said, or it seemed to say:
"Truly, all men must go a-ghosting
And no man knows his day."
And the leaves stared in at the window
Like the people at a play. 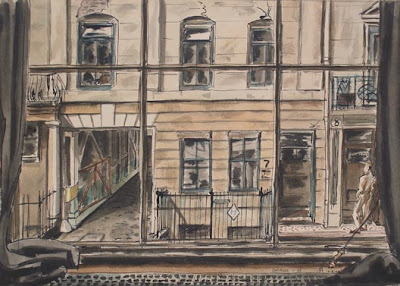 A rather bleak looking house on Charles II Street, and a perfect accompaniment for the poem. The beat of the poem (even the mood) reminds me a little of The Highwayman by Alfred Noyes.

Thank you for visiting and commenting again, Ms. Whitmore. And thank you for the reference to "The Highwayman." I sometimes get in the mood for those late-Victorian, pre-Edwardian narrative poems -- "Lepanto" by Chesterton and "He Fell Among Thieves" by Newbolt come to mind as well.