"True And Not Feigning": Edward Thomas And John Clare

Edward Thomas wrote all of his poems between December of 1914 and January of 1917.  Some have suggested that this creative period was a sort of "miracle," given that Thomas had not previously written poetry.  I disagree.  If there was any "miracle," it was the fact that Thomas and Robert Frost met each other in 1913.  Moreover, Thomas's prose writings prior to 1914 show, first, that he knew English poetry inside and out, and, second, that he had long thought about -- and felt -- the essence of true poetry.

His discussion of a poem by John Clare reveals the depth of Thomas's thoughts and feelings on the subject of poetry.  He begins by quoting in full the following untitled poem by Clare:

Love lives beyond the tomb,
And earth, which fades like dew!
I love the fond,
The faithful and the true.

'Tis heard in Spring,
When light and sunbeams, warm and kind,
On angel's wing
Bring love and music to the mind.

And where's the voice,
So young, so beautiful, and sweet
As Nature's choice,
Where Spring and lovers meet?

Love lives beyond the tomb,
And earth, which fades like dew!
I love the fond,
The faithful and the true.

After quoting the poem, Thomas writes:  "This and perhaps all of his best poems show Clare as one of those who have in them the natural spirit of poetry in its purity, so pure that perhaps he can never express it quite whole and perfect."  Thomas then comes to the heart of things:

"Here, I think, in 'Love lies beyond the tomb,' in this unprejudiced singing voice that knows not what it sings, is some reason for us to believe that poets are not merely writing figuratively when they say, 'My love is like a red, red rose,' that they are to be taken more literally than they commonly are, that they do not invent or 'make things up' as grown people do when they condescend to a child's game.  What they say is not chosen to represent what they feel or think, but is itself the very substance of what had before lain dark and unapparent, is itself all that survives of feeling and thought, and cannot be expanded or reduced without dulling or falsification.

If this is not so, and if we do not believe it to be so, then poetry is of no greater importance than wallpaper, or a wayside drink to one who is not thirsty.  But if it is so, then we are on the way to understand why poetry is mighty; for if what poets say is true and not feigning, then of how little account are our ordinary assumptions, our feigned interests, our playful and our serious pastimes spread out between birth and death."

This is the wisdom and the sensibility that Thomas already had in him when the time came for him to (at last!) write his poems.  And what he said in those poems is -- above all else -- "true and not feigning."  I return once more to what Kingsley Amis said of Thomas: 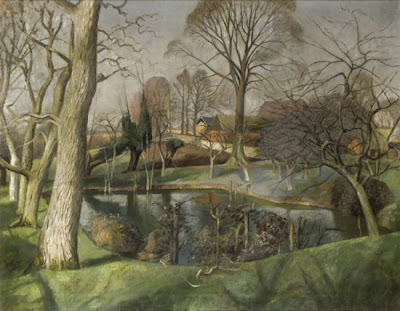 That was one of the most enlightening and coherent blog posts that I have ever read. I think as a result I will stop rereading Larkin and branch out a little. Next thing you know I'll be reading novels.

Thanks so much for sharing this connection between two great poets. Could you by any chance recommend an anthology of Thomas's prose, or certain books that strike you as containing the best of his criticism and essays? I can't find anything but his poems in print in America, and it's obvious from what you've quoted that there's much else worth reading.

Thanks as always for the discoveries,

S R Plant: thank you very much -- it is very kind of you to say that, and I greatly appreciate your thoughts. But I think that any enlightenment and coherence is solely attributable to Edward Thomas, not I!

As for Larkin: I'm reading his letters now (in small daily doses), so I know the temptation. (But for real entertainment lately, I have been reading Bernard-Henri Levy's spirited defenses of his pal DSK!)

Thank you for visiting and commenting again, Akshay.

The best one-volume source for Thomas's critical writing is the collection compiled by Edna Longley -- A Language Not To Be Betrayed: Selected Prose of Edward Thomas. Most of his critical writing is hard to track down because it appeared in newspapers and journals, and was never collected during his lifetime (or after his death, for that matter). Longley's collection contains the largest selection of those fugitive critical pieces. His best full-length books of criticism are, I think, Feminine Influence on the Poets (1910) and Keats (1916).