Christmas, Part One: "We Are Folded All In A Green Fable"

My Christmas memories were formed in part by the Goodyear Tire and Rubber Company.  During the Sixties, Goodyear annually issued a series of records (yes, 33 and 1/3 rpm records) titled The Great Songs of Christmas. The albums featured the best singers of the time, many of whom may be unknown to my younger readers:  Bing Crosby, Andy Williams, Johnny Mathis, Doris Day, Sammy Davis, Jr., et cetera.  I remember my father buying the record at the tire store each year, about the time that the first snow fell.  We listened to the music as we decorated the tree. 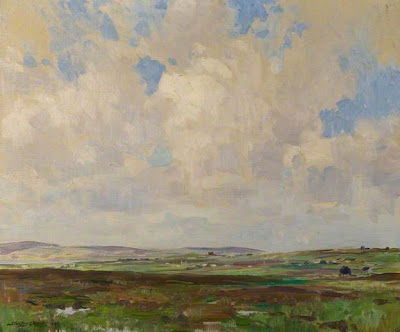 George Mackay Brown, The Wreck of the Archangel (1989).

Except for brief periods, George Mackay Brown spent his entire life in Orkney.  His poetry and prose reflect both the agricultural life and the sea life of the islands.  As "Christmas Poem" suggests, the world of Orkney seems to be a timeless one, or, perhaps better, one that moves with the rhythm of Time. 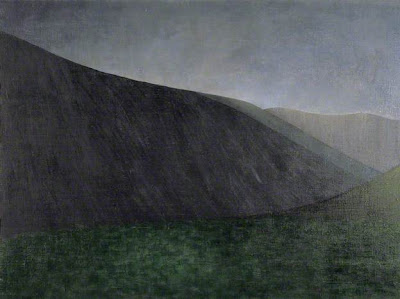 I have been a regular reader of your blog since I discovered it around three months ago. It is far and away one of my favourites and reading the poetry you choose is very much like looking along my own poetry bookshelf, though there are always new pieces to be discovered I also really like the paintings you choose . Today's poem by George Mackay Brown reminded me of an essay I recently read about him and the other Orcadian poet, Edwin Muir, entitled Light from the Orkneys by the Right Reverend Lord Harries of Pentregarth. It is available online. I thought you may be interested. Apologies if you know of this piece already.

My father was a fan of Mario Lanza and one of the sure signs of the approaching Yuletide was Lanza's rendition of "We Three Kings of Orient Are." He was especially happy when Lanza came out with a whole LP of Christmas songs.

Dear Stephen
I was delighted to see that you had included one of my uncle's poems in your excellent blog. I'm sure George would have been pleased. He knew Stanley Cursiter quite well. The painting of Hoy( an island which George loved) is a new one to me. I'm intrigued to know where your source your images.
Eoin Mackay Ross

Mr. Ashton: thank you very much for your kind words. I'm pleased that you found your way here.

And thank you as well for the reference to the essay and lecture by Lord Harries. In fact, I hadn't seen it before. I found both the essay and a video of his lecture at the Gresham College website. I have not had a chance to read/listen to the entire essay yet, but I can see already that I will learn a great deal about both of them from it.

Thank you again. I hope that you'll return soon.

Fred: as always, it's good to hear from you.

I'm biased, of course, but I think that the heyday of popular Christmas music was the 40s through the 60s: the traditional carols, as well as wonderful new songs by the songwriters of those times, sung by great entertainers. To sound like an old fogey: it doesn't feel the same anymore.

Thanks for your thoughts.

Eoin Mackay Ross: thank you very much for your kind words -- I do hope that he would have been pleased. I respect him and his work a great deal.

I wasn't aware that he knew Stanley Cursiter, but I'm not surprised that he would. I'm pleased to find out about the association.

I find my images on various museum and gallery websites. In recent years this effort has been made easier by the BBC/Public Catalogue Foundation "Your Paintings" website, which collects images from museums throughout the UK. The collection of images from the smaller museums and galleries is particularly nice, since those institutions weren't as easily accessible previously.

Dear Mr Pentz,
Thank you very much for your reply to my comment.
I am pleased that you found the link to the essay/lecture and I hope you will find it as interesting as I did.
You have also answered another question of mine in your reply to Mr Ross. I myself had wondered where you sourced many of the wonderful images you post on your blog.
I do endeavour to visit most days if time and the demands of work allow. Be sure I shall return. It is always a delight to see which poem/poems you have chosen.

Mr. Ashton: thank you for your follow-up comments. I look forward to further visits from you.

Dear Stephen
I discovered your blog earlier this evening, by chance, while searching for a Wordsworth line and have since been happily sidetracked by both the writing and the beautiful pictures you choose.
Thank you
Melanie

Melanie: I'm pleased that you found your way here. Thank you very much for your kind words. I hope that you will return soon.

I only discovered George Mackay Brown this year, when an Orkney friend recommended several of his books which I have yet to read as I have a pile of books up to my waist, awaiting my time.

What a wonderful poem - he was so in tune with life in the countryside and what images the line "Plough-and-daffodil sun" conjures up. Loved the Stanley Cursiter painting too.

Bovey Belle: I also have a number of books by him that I have been meaning to read. Perhaps we can both catch up in the coming year!

It's good to hear from you again. Merry Christmas.