Christmas, Part Three: "Christmas, Someone Mentioned, Is Almost Upon Us"

The following poem by Patrick Kavanagh comes from the period of high spirits that he experienced in the mid- to late-1950s following his successful surgery for lung cancer in the spring of 1955.  As I have noted in previous posts, Kavanagh experienced a poetic rebirth during this period, and his poems of the time are marked by ecstatic verbal flights about the wonder and beauty of Life and of the World.

In this case, the approach of Christmas sends him off on unexpected, but beguiling, tangents.

Christmas, someone mentioned, is almost upon us
And looking out my window I saw that Winter had landed
Complete with the grey cloak and the bare tree sonnet,
A scroll of bark hanging down to the knees as he scanned it.
The gravel in the yard was pensive, annoyed to be crunched
As people with problems in their faces drove by in cars,
Yet I with such solemnity around me refused to be bunched,
In fact was inclined to give the go-by to bars.
Yes, there were things in that winter arrival that made me
Feel younger, less of a failure, it was actually earlier
Than many people thought; there were possibilities
For love, for South African adventure, for fathering a baby,
For taking oneself in hand, catching on without a scare me, or
Taking part in a world war, joining up at the start of hostilities. 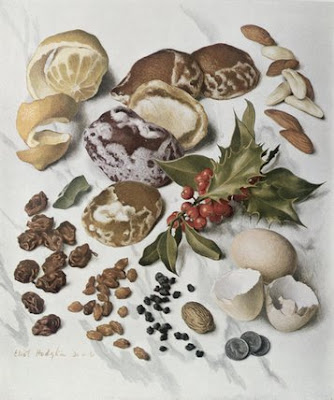 Eliot Hodgkin
"A Pictorial Recipe For Your Plum Pudding" (1961)

The poem is in the 14-line quasi-sonnet form that Kavanagh often favored during his "Canal Bank" period.  I say "quasi-sonnet" because, to purists, he was not always precise in his meters and rhymes.  However, I am no purist, and I find his playful use of the form perfect for his mood at the time.

As to what it all "means," who knows?  For instance, I don't know quite what to make of the list of "possibilities" in the last four lines.  "Catching on without a scare me" may be an idiomatic expression that I am unaware of.  "Taking part in a world war, joining up at the start of hostilities" perhaps reflects the Cold War frights of the time (the poem was first published in a periodical in 1959).  I suppose the point may be that, in Kavanagh's euphoric, death-dodging state of mind, anything that comes his way bears the possibility of wonder and joy.  Something to bear in mind at this time of year (or at any time of year). 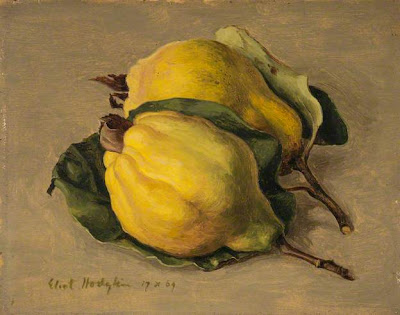 Mr Pentz,
Christmas is, indeed, almost upon us. It is ,then, a good time to thank you for the gift of "First Known When Lost" which is always such a source of enjoyment and education. I visit often but seldom comment, as I feel your own words and, of course, the poetry render that superfluous. However, may I wish you a Happy Christmas and, when it comes, a peaceful and fruitful New Year. Once more, many thanks.
Andy McEwan.

Mr McEwan: thank you very much for your kind words.

And I owe thanks to you for being a regular visitor, and for your thoughtful comments, which I always appreciate hearing.