Christmas, Part Seven: "Out In The Dark"

Given these circumstances, there is a temptation to, in retrospect, read things into the poem that are perhaps not there.  In fact, the subject and the emotional tenor of the poem are characteristic of the Edward Thomas that one comes to know from all of his poems.  His personality is evident throughout the poem.  In this regard, I refer you in particular to a phrase in the final line that is quintessential (and lovely) Thomas:  "if you love it not."  The entire poem turns upon those words. 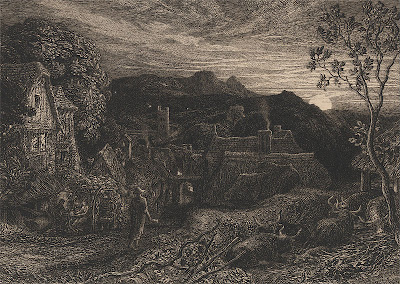 Out in the Dark

Out in the dark over the snow
The fallow fawns invisible go
With the fallow doe;
And the winds blow
Fast as the stars are slow.

Stealthily the dark haunts round
And, when a lamp goes, without sound
At a swifter bound
Than the swiftest hound,
Arrives, and all else is drowned;

And star and I and wind and deer
Are in the dark together, -- near,
Yet far, -- and fear
Drums on my ear
In that sage company drear. 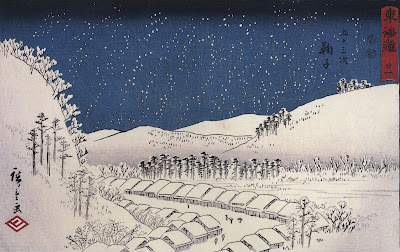 After Thomas's death, his wife Helen sent a volume of his posthumously-published poetry to Thomas Hardy.  Hardy wrote a letter to her thanking her for the gift, and praising the poetry.  Later, Hardy wrote the following poem.

The Fallow Deer at the Lonely House

It is nice to think that Hardy may have written the poem with "Out in the Dark" in mind.  However, to my knowledge, there is no direct evidence that this is the case. 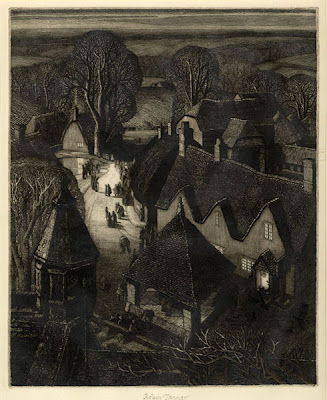 Dear Steven, I would like to thank you for showing us such beauty throughout the year. With all good wishes for a very Happy Christmas and an inspirational New Year.

Thanks; the Edward THomas poem and the Hardy poem are both beautiful. I like the connection you've drawn, whether or not it was deliberate, known or conscious. Edward Thomas is growing on me...

Edward Thomas' poems can appear, at first sight, rather flat, loosely formed, and suffused with an unexplained melancholy. But when you study them more closely you become aware of the originality and intensity with which he observed the natural world and wrote lyrically about English landscapes and country folk.

His poetry evokes the English countryside before it became littered with the houses and traffic of far too many people. He was a man who loved the England of 1912, and, with hindsight, he seems to be bidding it a long farewell. As Robin Skelton, the editor of my copy of Edward Thomas' Selected Poems, observes, it's a terrible thing that so often we appreciate people and places only when we are on the point of leaving them.

A hundred years on his poems are especially haunting, if, like Thomas Hardy, you're a man who used to notice such things.

Thomas and Hardy, and yet another, Frost. I couldn't help but think of his "An Old Man's Winter Night," which begins--

"All out-of-doors looked darkly in at him
Through the thin frost, almost in separate stars,
That gathers on the pane in empty rooms."
- - - - - -

And the last three lines

"One aged man--one man--can't keep a house,
A farm, a countryside, or if he can,
It's thus he does it of a winter night."


Influences? Probably not, but a common perspective, a way of thinking and seeing?

acornmoon: and I thank you for your visits as well. Merry Christmas and Happy New Year.

Ms. Aykroyd: I'm pleased that you liked the poems. And I hope that Thomas continues to grow on you!

Alex: thank you very much for that perspective on Thomas. There is an elegiac feeling to much of what he wrote, isn't there? I agree with you that, in particular, he was writing an elegy for the English countryside and for its way of life. I'm certain you've heard the anecdote (told by Eleanor Farjeon, I believe): after he joined the army, she (or someone else) asked him what he was fighting for; he picked up some soil and said "This."

To pull a phrase by Yeats out of its context: his poetry seems like "a continual farewell."

I think that Hardy had a similar sense that things were passing away. Which may explain why he was so keen to bring Dorset's past (and his memories of it) into his poems and novels.

Thank you very much for all of your thoughts throughout the year. Merry Christmas to you as well.

Fred: ah, that's very nice! I hadn't thought of that. "All out-of-doors looked darkly in at him" and the rest of the poem go together wonderfully with "Out in the Dark" and "The Fallow Deer at the Lonely House."

I agree wholeheartedly about "a common perspective," especially when it comes to Thomas and Frost. The last stanza -- and especially the "if you love it not" -- sound to me as if they could have been written by Frost. I think that they had the sort of relationship where they could complete each other's thoughts. "The only brother I ever had," as Frost said of Thomas after Thomas died.

As you and I have discussed before, they both have that knack for turning things around and inside out over the course of a poem, and finishing with a reversal.

It's always good to hear from you. Merry Christmas.