R. S. Thomas was never one to mince words.  Thus, not surprisingly, his Christmas poems (several of which I have posted here previously) have a touch of Thomas's fierceness to them.  But they also have an undercurrent of peace and serenity.  (Again, not surprisingly.  Thomas was not as much of a curmudgeon as he is sometimes made out to be.  Yes, he often presents a fairly brusque and forbidding surface, but this often serves as a mask, I think.)

The following poem is an instance of what I am trying to describe:  a bit of peace, a bit of serenity, even a whisper of love -- and a dose of fierceness for good measure.  There is nobody quite like R. S. Thomas. 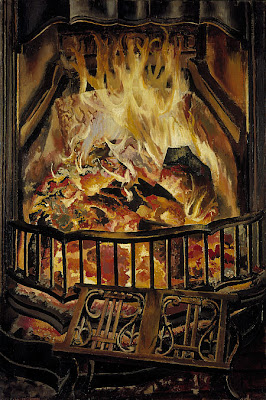 In front of the fire
With you, the folk song
Of the wind in the chimney and the sparks'
Embroidery of the soot -- eternity
Is here in this small room,
In intervals that our love
Widens; and outside
Us is time and the victims
Of time, travellers
To a new Bethlehem, statesmen
And scientists with their hands full
Of the gifts that destroy. 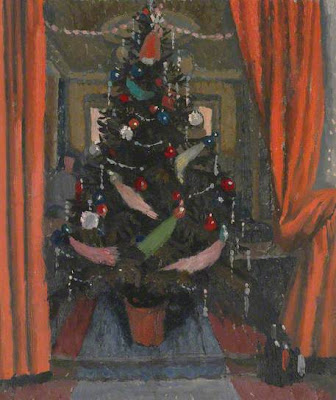 eternity
Is here in this small room,
In intervals that our love
Widens;

This is very good. I'm not sure how specific this love is intended to be. It could conceivably be other forms, including, of course, religious. There is an optimism in the thought that the intervals are to some extent within our control.

I know very little about Thomas (to my shame!) but this makes me want to read more.

Thank you for this, and if you don't post again in the next couple of days, may I wish that some of that love and eternity visits your Christmas.

Sam Vega: thank you for visiting again, and for those thoughts.

I agree: the love that he speaks of may be specific or may take a more general form. Probably both.

In speaking of the "intervals," you have hit upon something that is very characteristic of Thomas's poetry: it is dotted with poems that are about specific moments/intervals in which something out of the ordinary breaks through: not necessarily a "revelation" or an "epiphany," but (for lack of a better word at this time) a sort of clarity (or, more grandly, a moment in which eternity breaks through).

A wonderful poem by him titled "The Bright Field" (which I have posted on the blog previously) demonstrates what I am trying to get at.

Thank you very much for the lovely Christmas wish. Merry Christmas to you as well!