"Still Are Thy Pleasant Voices, Thy Nightingales, Awake"

Considering that the odds of writing a good poem are long (even for an accomplished poet), being remembered for a single poem is not a bad thing.  Such is the case of William Johnson Cory (1823-1892).  In Cory's case the single poem is the translation of an epigram by Callimachus.  But Cory's version of Callimachus's poem is so fine that he has transformed it into his own -- while remaining true to the spirit of the original.

They told me, Heraclitus, they told me you were dead,
They brought me bitter news to hear and bitter tears to shed.
I wept, as I remembered, how often you and I
Had tired the sun with talking and sent him down the sky.

And now that thou art lying, my dear old Carian guest,
A handful of grey ashes, long, long ago at rest,
Still are thy pleasant voices, thy nightingales, awake;
For Death, he taketh all away, but them he cannot take.

Well, on the strength of this poem, I believe we can say of William Johnson Cory himself:  "Still are thy pleasant voices, thy nightingales, awake . . ." 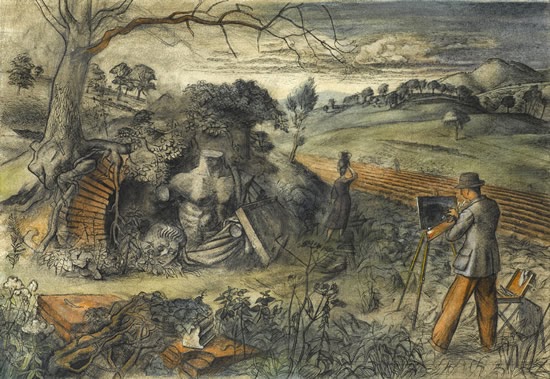 Here is a prose version of Callimachus's poem:

"One told me of thy death, Heraclitus, and it moved me to tears, when I remembered how often the sun set on our talking.  And thou, my Halicarnassian friend, liest somewhere, gone long long ago to dust; but they live, thy Nightingales, on which Hades who seizeth all shall not lay his hand."

Callimachus (translated by W. R. Paton), in W. R. Paton, The Greek Anthology (Heinemann 1919).  The "Heraclitus" referred to in the epigram is not the well-known Greek philosopher, but a poet from Halicarnassus. According to Paton, "Nightingales" is "the title of a book of poems."

For purposes of comparison, here are two other verse translations:

They told me, Heraclitus, thou wert dead;
And then I thought, and tears thereon did shed,
How oft we two talk'd down the sun:  but thou,
Halicarnassian guest! art ashes now.
Yet live thy nightingales of song; on those
Forgetfulness her hand shall ne'er impose.

One told me, Heraclitus, of thy fate,
Which brought the tear into my eye to think
How oft we two, conversing long and late,
Have seen the sun into his chamber sink;
But that is past and gone, and somewhere thou,
Halicarnassian guest! art ashes now.
Yet live those nightingales of thine; on these
The all-grasping hand of Hades will not seize.

The prose translation and the two verse translations contain the same elements as Cory's version:  tears of sorrow; a memory of friends talking until the sun went down; ashes/dust; poems as nightingales; Death/Hades/forgetfulness.  But they cannot hold a candle to what Cory has pulled off.  Because I am a sworn enemy of explication and explanation, I will say only this:  Cory has written a lovely poem.  A poem which, once read, cannot be forgotten.  Why this is so is what makes poetry the wondrous thing it is.  We should leave it at that.  Definitions destroy. 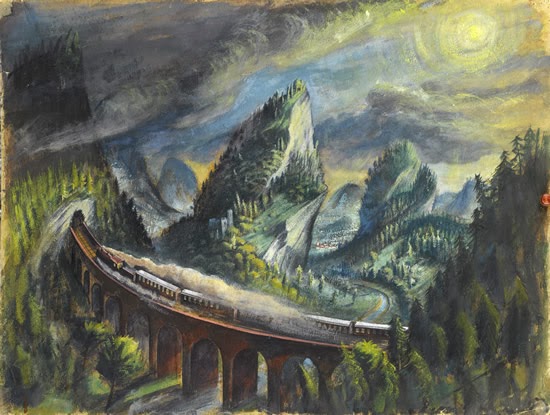 Alan Sorrell, "Train in a Landscape"
Posted by Stephen Pentz at 12:10 AM

I love this first translation, it is so close to perfection. I like how you shared a prose translation and other poetic versions. How intriguing to be remembered for one ideal poem.

Terra: thank you very much for visiting, and for your thoughts. If possible, I always try to find alternative translations for purposes of comparison -- if nothing else, it gives me a feel for the key elements of the original text. I agree that Cory's version is wonderful, and provides a timeless (I hope) monument for him (and for Callimachus).

What a wonderful post. Cory's version seems to leap off the page; the others leaden by comparison.
I also heard the faintest of echoes -- I must have heard someone long ago say "We tired the sun with talking..."
Susan

Susan: yes, Cory's version is wonderful, isn't it? I understand what you mean about "We tired the sun with talking . . ." -- it does seem to be an echo of something, but I can't put my finger on it either. Or perhaps Cory simply came up with a phrase so lovely and so resonant that we think we ought to have heard it before.

It's always nice to hear from you. Thank you for visiting.

David Saunders
I was taught Cory's version at school back in the 1930s, I am 90, and I remembered it ever since, almost word perfect.
There is though one big departure. I remember it as 'still are thy sweet rememberances' rather than 'pleasant memories'. Personally I think it sounds better.
I am no great poet, and could never have dreamed this up myself. I am not even sure there is such a word, this spellchecker thinks likewise.
Can anyone throw any light on this?

Mr. Saunders: Thank you very much for sharing those thoughts. Your memory is impressive! And how fortunate you are to have been taught the poem at school at an early age.

As for the line you quote, I checked Ionica, the collection of poems in which the poem first appeared. The collection was first published in 1891, and the line reads: "Still are thy pleasant voices, thy nightingales awake." A third edition of Ionica (edited by A. C. Benson) was published in 1905 (thirteen years after Cory's death), and contains the same version of the line: "Still are thy pleasant voices, thy nightingales awake." Both editions are available on the Internet Archive if you wish to take a look.

Thank you very much for visiting, and for taking the time to share your thoughts.

Mr Pentz
Thank you for your interest.
I was taught this version by Mr E T Davis at Parkside School in East Horsley near Effinghham in Surrey in the 1930s.
He also taught us 'Remember now thy Creator' etc., which I have remembered also.
Maybe someone can offer an explanation for the 'rememberance'.
David Saunders.

Mr. Saunders: Thank you very much for your follow-up thoughts. And thank you for visiting again.