"The Knight In The Wood"

The following poem is a little-known poem that was written by a little-known poet.  However, I think that it says something important about art (in the broad sense of any creative activity, including poetry).  I hope that I do not sound too high-falutin', but I am not interested in art that cannot tell us something about what it means to be a human being, and, perhaps, how to get through an ordinary day in a sensitive, dignified manner.  (In other words, no dead sheep suspended in formaldehyde-filled glass tanks for me, thank you.)  But enough.  The poem says it much better than I can.

The thing itself was rough and crudely done,
Cut in coarse stone, spitefully placed aside
As merest lumber, where the light was worst
On a back staircase.  Overlooked it lay
In a great Roman palace crammed with art.
It had no number in the list of gems,
Weeded away long since, pushed out and banished,
Before insipid Guidos over-sweet,
And Dolce's rose sensationalities,
And curly chirping angels spruce as birds.
And yet the motive of this thing ill-hewn
And hardly seen did touch me.  O, indeed,
The skill-less hand that carved it had belonged
To a most yearning and bewildered heart,
There was such desolation in its work;
And through its utter failure the thing spoke
With more of human message, heart to heart,
Than all these faultless, smirking, skin-deep saints;
In artificial troubles picturesque,
And martyred sweetly, not one curl awry --
Listen; a clumsy knight who rode alone
Upon a stumbling jade in a great wood
Belated.  The poor beast with head low-bowed
Snuffing the treacherous ground.  The rider leant
Forward to sound the marish with his lance.
You saw the place was deadly; that doomed pair,
The wretched rider and the hide-bound steed
Feared to advance, feared to return -- That's all! 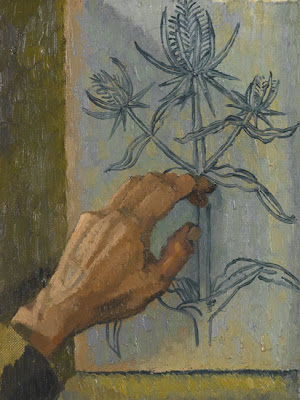 Stephen, Its an amazing poem. I've just read it twice through. The insight of the author and the truths it says about art, struggle and perception are wrenching, at least to this reader.
best
julie

I'm pleased that you like it, Julie. I was struck by it when I first came across it in an anthology of Victorian poetry. I thereafter sought out his other poetry, but I couldn't find anything that comes close to it. For some reason, in this poem he drops the Victorian tone and diction that characterizes most of his poetry, and seems to speak his mind plainly. And I agree that the result is "amazing."

But I shouldn't have the bad manners to criticize him at all: I've long been very grateful for "The Knight in the Wood."

What an interesting and beautiful poem!

Ms. Aykroyd: Thank you for visiting again. I'm glad that you like the poem. I was lucky to have stumbled upon it.

What a wonderful poem, thank you.

It reminds me of Browning's Andrea del Sarto when he compares his painting technique (and its hollowness) to that of lesser draftsmen,

"There burns a truer light of God in them,
In their vexed beating stuffed and stopped-up brain,
Heart, or whate'er else, than goes on to prompt
This low-pulsed forthright craftsman's hand of mine.
Their works drop groundward, but themselves, I know,
Reach many a time a heaven that's shut to me"

Kylie: thank you very much for visiting and commenting. I'm pleased that you like the poem. And thank you as well for the Browning reference (his work is a largely unexplored expanse for me, I'm ashamed to say). The lines that you quote are wonderful: right in line with what Leicester Warren is getting at, I think.

Stephen, I've come back to read this poem several times since you posted it. It's lovely--but it appears the poem may still be taught here and there, if the pre-written online English papers about it are any indication...

Jeff: thank you very much for stopping by, and for your thoughts on the poem. I ran a Google search after seeing your comment about English papers: that is interesting, isn't it? My guess is that the poem is still taught because it appears in both of the two leading recent anthologies of Victorian poetry: Christopher Ricks's New Oxford Book of Victorian Verse and Daniel Karlin's Penguin Book of Victorian Verse (which is where I first encountered it). In any event, I'm pleased that it is still alive.

Good to see this poem again! It came up on an International Baccalaureate exam one year, and I used it in my classes for decades after that. Unless I'm mistaken (or fooled by the tiny print!) you've not mentioned the poet. He is Edward Plunkett (Lord Dunsany.)

What I like best about the poem is the awkward, ungainly, clumsy structure of the poem reflecting the sculpture. The poem is a word version of the scultpture.

Fleska's Words: Thank you very much for sharing your thoughts on the poem. It's nice to know that others are aware of the poem as well -- it is wonderful, isn't it?

Actually, I did include the name of the poet in the post (at the conclusion of the poem): John Leicester Warren (also known as John Byrne Leicester Warren, the 3rd Baron de Tabley, or Lord de Tabley). I also referenced the source: Rehearsals: A Book of Verses (1870). (It can be found on the Internet Archive; the title page identifies "John Leicester Warren" as the author; the poem appears on page 76.)

Thank you again for stopping by, and for sharing your thoughts.