In an "Afterword" to his Collected Stories, Saul Bellow has this to say about "distraction":

Our consciousness is a staging area, a field of operations for all kinds of enterprises, which make free use of it.  True, we are at liberty to think our own thoughts, but our independent ideas, such as they may be, must live with thousands of ideas and notions inculcated by influential teachers or floated by "idea men," advertisers, communications people, columnists, anchormen, et cetera.  Better-regulated (educated) minds are less easily overcome by these gas clouds of opinion.  But no one can have an easy time of it. . . . Public life in the United States is a mass of distractions.

By some this is seen as a challenge to their ability to maintain internal order.  Others have acquired a taste for distraction, and they freely consent to be addled.  It may even seem to many that by being agitated they are satisfying the claims of society.  The scope of the disorder can even be oddly flattering:  "Just look -- this tremendous noisy frantic monstrous agglomeration.  There's never been anything like it.  And we are it!  This is us!" 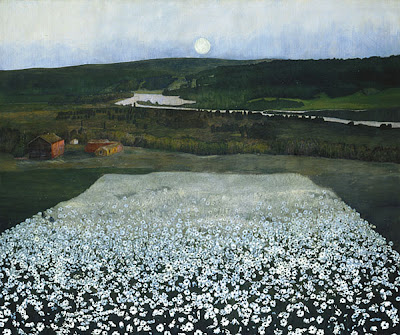 Thank you for visiting again, Mr. Riddle. And thank you for the reference to Dante -- it does fit well.

Upon hearing this phrase for the first time, my thinking was, "What are we being distracted, or kept, from? My only answer is that distractions allow us to postpone wrestling with the central questions of life. It can be very uncomfortable to step out of the collective trance. Every generation has its distractions, whether that involves simply staying alive or having available the time and resources to create bright lights and gadgetry.

Steve: thank you very much for visiting, and for your thoughts. I think that you have provided an excellent explanation of what Eliot was getting at. Thanks again.

I've been intrigued by this phrase of Eliot's for a long time. So far I haven't found a good explanation, not for what we are distracted BY, because we undeniably live in a world chock-full of distractions, but what Eliot meant by his second 'distraction' the one we are distracted FROM...

Is he implying that in the busy modern world there is a greater, higher distraction – one of god or the spiritual search, say – which requires our distraction, and it's THAT that we are distracted from...?


'Steve' has addressed this as 'the central questions of life' but he also doesn't specify that this is the fundamental thing we are distracted FROM... as if there are two kinds of distractions.

In other words, we are distracted FROM the essential questions of life BY the superficial worldly glitter all around us.

Do you have any view on this?

(Having just written all this, I've re-read what Steve wrote and realize that he IS saying just that. Duh. So we all agree then...?)

Savita: Thank you very much for your thoughts on Eliot's phrase. I cannot say that I have ever settled firmly on the "meaning" of the line. (I suppose I am content to simply enjoy the beauty of its sound.) I have tended to think that the first use of "distraction" refers to one of the standard definitions: "extreme agitation of the mind or emotions." But I can see that your (and Steve's) interpretation ("the central questions of life") has merit.

In this connection, you may be interested in C. A. Bodelsen's thought on the phrase in his book T. S. Eliot's Four Quartets: A Commentary (Second Edition 1966). Of the phrase, he writes: "The two meanings of 'distraction' are here 'vacancy of spirit' and 'way of passing the time'." (Page 53.) "Vacancy of spirit" is an interesting phrase.

Thank you again for sharing your thoughts, and for visiting.