In November of 1915, Edward Thomas was posted to Hare Hall Camp, near Romford in Essex, where he served as a map-reading instructor for officers.  During that month, he wrote three poems.  This is one of them.

There's nothing like the sun as the year dies,
Kind as it can be, this world being made so,
To stones and men and beasts and birds and flies,
To all things that it touches except snow,
Whether on mountain side or street of town.
The south wall warms me:  November has begun,
Yet never shone the sun as fair as now
While the sweet last-left damsons from the bough
With spangles of the morning's storm drop down
Because the starling shakes it, whistling what
Once swallows sang.  But I have not forgot
That there is nothing, too, like March's sun,
Like April's, or July's, or June's, or May's,
Or January's, or February's, great days:
And August, September, October, and December
Have equal days, all different from November.
No day of any month but I have said --
Or, if I could live long enough, should say --
'There's nothing like the sun that shines today.'
There's nothing like the sun till we are dead.

On November 1, Thomas made the following entry in one of his notebooks:  "Sweet as last damsons on spangled tree when November starling imitates the swallow in sunny interval between rain and all is still and dripping."  In her annotation to the poem, Edna Longley identifies the first line of Shakespeare's Sonnet CXXX ("My mistress' eyes are nothing like the sun") as the source of Thomas's refrain. 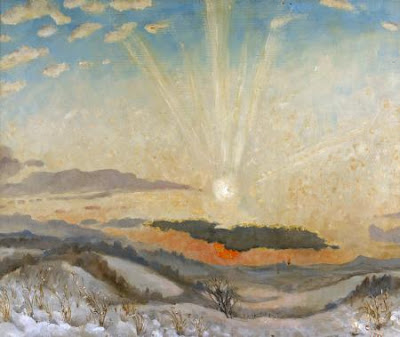 I suspect also that this line--

"whistling what
Once swallows sang"

bears more than an accidental resemblance to

Also from the sonnets.

Thank you for the introduction to this poem. Although I may not always comment, I do so enjoy reading your entries. Always an engaging combination of visual & literary gems.

Poignant. Wasn't Thomas the one who said "The past is the only dead thing that smells sweet?"

Murgatroyd: As always, thank you for visiting and commenting. I'm pleased that you enjoyed the poem. As you can tell, Edward Thomas is one of my favorites.

Mr. Sigler: Thank you for visiting and commenting again. You have an excellent memory! In "Early One Morning" Thomas writes: "The past is the only dead thing that smells sweet,/The only sweet thing that is not also fleet."