A Moose Swims Across A Lake

Thirty or so years ago, I spent a summer living in a cabin on the south shore of an otherwise uninhabited mountain lake in northern Idaho.  The lake was about three-quarters of a mile wide from north to south.  Every so often, a moose would swim across the lake from the north shore, stepping out of the water into the cattails just a few yards away from the cabin.  Then it would slowly walk off into the thick, moss-hung woods.

We never know when an unforgettable memory is about to arrive, do we?

Years later -- to my surprise and delight -- I discovered the following poem by Robert Frost. 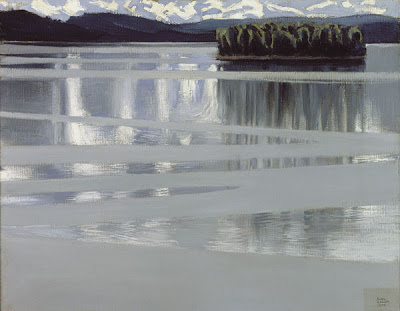 A favorite of mine--thanks for posting it. Time for another session with Frost. It's been awhile.

Fred: Thank you for visiting and commenting again. I'm pleased that you like 'The Most of It' as well. As you may have gathered from my recent posts, I have been revisiting Frost after a too-long absence. I always find things that I had forgotten about, or had never noticed before.