In Praise Of Saul Bellow

I have been looking forward to this week's publication of Saul Bellow's Letters.  To mark this event, here is a passage from The Adventures of Augie March that displays all of the wonder of  Bellow's writing:  the vivid particularity, the thought, the feeling -- in short, the all-around beauty and wisdom of what Bellow did, time and time again.

"I remember I was in fishmarket square in Naples (and the Neapolitans are people who don't give up easily on consanguinity) -- this fishmarket where the mussels were done up in bouquets with colored string and slices of lemon, squids rotting out their sunk speckles from their flabbiness, steely fish bleeding and others with peculiar coins of scales -- and I saw an old beggar with his eyes closed sitting in the shells who had had written on his chest in mercurochrome:  Profit by my imminent death to send a greeting to your loved ones in Purgatory: 50 lire.

Dying or not, this witty old man was sassing everybody about the circle of love that protects you.  His skinny chest went up and down with the respiration of the deep-sea stink of the hot shore and its smell of explosions and fires.  The war had gone north not so long before.  The Neapolitan passersby grinned and smarted, longing and ironical as they read this ingenious challenge.

You do all you can to humanize and familiarize the world, and suddenly it becomes more strange than ever.  The living are not what they were, the dead die again and again, and at last for good. 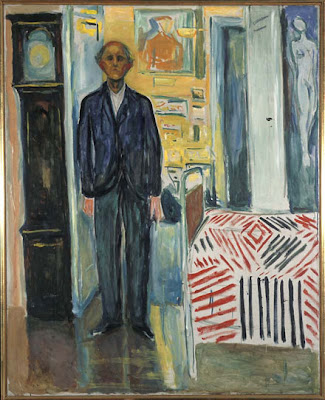