A Thrush Sings Within A Dark Forest

As I came to the edge of the woods,
Thrush music -- hark!
Now if it was dusk outside,
Inside it was dark.

But no, I was out for stars:
I would not come in.
I meant not even if asked,
And I hadn't been. 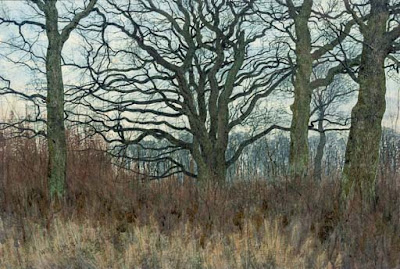 The green roads that end in the forest
Are strewn with white goose feathers this June,

Like marks left behind by someone gone to the forest
To show his track.  But he has never come back.

Down each green road a cottage looks at the forest.
Round one the nettle towers; two are bathed in flowers.

An old man along the green road to the forest
Strays from one, from another a child alone.

In the thicket bordering the forest,
All day long a thrush twiddles his song.

It is old, but the trees are young in the forest,
All but one like a castle keep, in the middle deep.

That oak saw the ages pass in the forest:
They were a host, but their memories are lost,

For the tree is dead:  all things forget the forest
Excepting perhaps me, when now I see

The old man, the child, the goose feathers at the edge of the forest,
And hear all day long the thrush repeat his song.

Edward Thomas wrote "The Green Roads" in June of 1916. 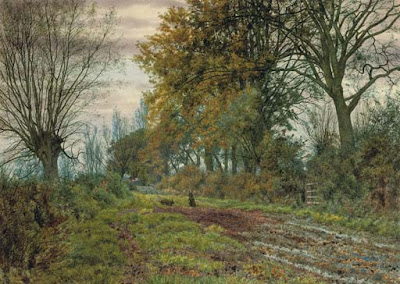 “ALMOST like a call to come in”
On a scientific note, it seems songbirds of a similar size can have very different size eyes (the eyes of the European robin are much larger than those of the chaffinch enabling the robin to sing much later into the evening). It sounds like Frost's thrush has large eyes – all the better to keep lusty rivals and wandering poets at bay!

Great to hear from you again, pomposa.

Your bird knowledge far exceeds mine -- thank you for the information. Your comment prompted me to do some quick research, and I discovered that the Official Vermont State Bird is the hermit thrush. Given the fact that Frost lived in Vermont for much of his life, perhaps it was a hermit thrush asking him to 'come in'?