Hilaire Belloc (1870-1953) could be a bit sardonic at times.  (Perhaps I am understating the case.)  Let's just say that he viewed the world with the proverbial gimlet eye.  But a  humorous gimlet eye.  Please bear this in mind as you consider the explanation of Life offered by him in the following poem:

Life is a long discovery, isn't it?
You only get your wisdom bit by bit.
If you have luck you find in early youth
How dangerous it is to tell the Truth;
And next you learn how dignity and peace
Are the ripe fruits of patient avarice.
You find that middle life goes racing past.
You find despair: and, at the very last,
You find as you are giving up the ghost
That those who loved you best despised you most.

As a coda to "Discovery," please consider the following poem, which, I admit, doesn't exactly support my contention that Belloc had a fun-loving side:

(By the way, the Oxford English Dictionary lists only one instance of the use of "strumble" in this sense:  Belloc's poem.)

To do Belloc justice, I feel compelled to demonstrate that he did, indeed, have a sense of humor.  Here is (I believe) the best political poem ever written -- one which applies to all places at all times, even though it was written in the context of a parliamentary election in England:

On a General Election

The accursed power which stands on Privilege
(And goes with Women, and Champagne and Bridge)
Broke -- and Democracy resumed her reign:
(Which goes with Bridge, and Women and Champagne).

In other words, Belloc beat Pete Townshend to the punch by 50 years or so:  "Meet the new boss.  Same as the old boss." 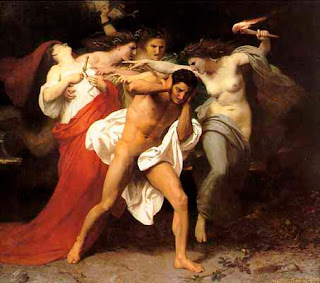 William-Adolphe Bouguereau
"Orestes Pursued by the Furies" (1862)
Posted by Stephen Pentz at 3:06 AM