Everything is abloom:  cherry trees, apple trees, plum trees, pear trees, magnolias, azaleas, tulips, daffodils -- you name it.  The grass is deep green and the sky is blue.  As I walked through the neighborhood yesterday I thought something along these lines:  The world is truly a paradise.

Of course, this sort of feeling cannot last for long.  After all, the petals of the cherry blossoms already lie across the grass, the sidewalks, and the cars like a layer of snow.  But still . . . 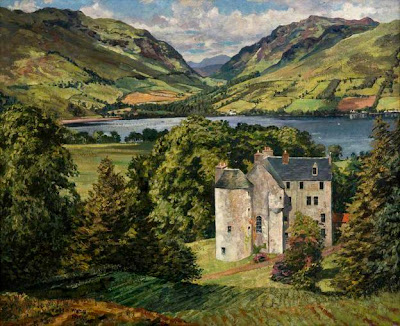 Surely you would not ask me to have known
Only the passion of primrose banks in May
Which are merely a point of departure for the play
And yearning poignancy when on their own.
Yet when all is said and done a considerable
Portion of living is found in inanimate
Nature, and a man need not feel miserable
If fate should have decided on this plan of it.
Then there is always the passing gift of affection
Tossed from the windows of high charity
In the office girl and civil servant section
And these are no despisable commodity.
So be reposed and praise, praise, praise
The way it happened and the way it is.

As I have noted before, Patrick Kavanagh experienced a poetic rebirth in the 1950s after his successful surgery for lung cancer in the spring of 1955. During this period he wrote what have come to be known as the "Canal Bank poems." (He wrote many of them during a time when he was wont to take walks along the Grand Canal in Dublin.)  Most of the poems are marked by the sort of euphoria that is found in "Question to Life."  Other fine examples include "The Hospital" and "Is," which I have previously posted.

Several of the poems are, like "Question to Life," sonnets (or something approaching a sonnet).  Please note the rhyming of "inanimate" in line 6 with "this plan of it" in line 8.  Very sly!  (Evidence of Kavanagh's euphoria, perhaps.) 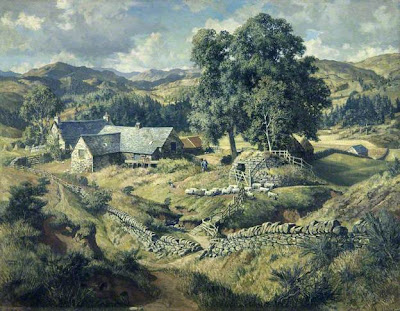 But, to return to the subject of paradise:  "Yet when all is said and done a considerable/Portion of living is found in inanimate/Nature, and a man need not feel miserable/If fate should have decided on this plan of it." Yes. "So be reposed and praise, praise, praise/The way it happened and the way it is."  Yes.  Despite the cherry blossom petals in the gutter.  Despite the news of the world. 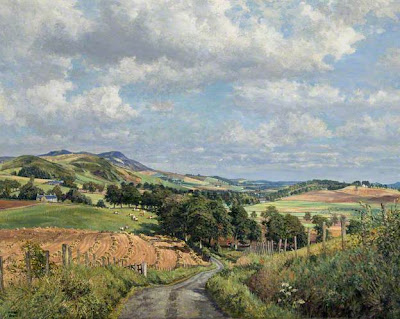 I found your beautiful blog by "Googling" the word "euphrasy" which I came across in an old herb book first published in 1939, entitled Herbs: How to Grow Them and How to Use Them by Helen Noyes Webster. I was researching Rue. Milton's quote from Paradise Lost was offered in the description, whence the route to your "First Known When Lost".

I spent an hour walking around my new/old garden yesterday morning in a light fog after three days of rain. All was lush; the subtle shades of green were intoxicating and the most grotesque intertwinings of the woodland trees were gorgeous. I practised the words I would write in my journal entry when I returned to the house. Yet the silence was not perfect what with commuters heading to the city from their country homes.

Today, listening to the news of the Chinese attorney's hospital confinement and the fact that several friends were banned from visiting him I was reminded of Saul Bellow's Dean's December where Minna was prevented from visiting her dying mother by the communist regime in Budapest.

Thank you for a delightful and unexpected treat here at First Known When Lost.

Ms Grenier: thank you very much for your kind words. I'm pleased that you found your way here, and I hope that you will return.

I did a bit of research myself when I first came across "euphrasy" in Sassoon's poem. Funny the way these bits of research lead us to unexpected places.

And thank you for the reference to Bellow -- it is right on point, isn't it? It makes me want to return to The Dean's December, which is wonderful, and which I read too long ago.