"Telling His Loneliness To The Solitary Stars"

The closing lines of John Masefield's "The Dead Knight" -- "The mournful word the seas say/When tides are wandering out or in" -- brought to mind a lovely poem by John Freeman (1880-1929).  I recently spouted off to the effect that "it is the poem that matters, not the poet."  In retrospect, this sounds too highfalutin', but my point is this:  a large number of fine poems tend to be overlooked simply because they were not written by well-known poets.

As long-time (and much-appreciated!) readers of this blog may have noticed, I am determined (in my tiny way) to save some of these poems (and the poets who wrote them) from oblivion.  I harbor no illusions about what I am up against -- the news of the world, and all the other deafening noise out there -- but I am stubborn. 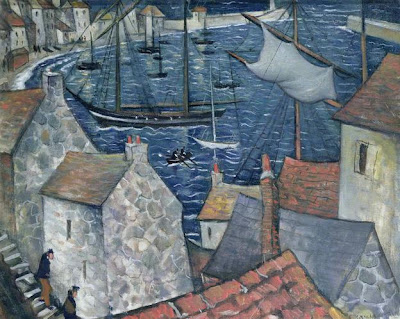 Far off a lonely hound
Telling his loneliness all round
To the dark woods, dark hills, and darker sea;

And, answering, the sound
Of that yet lonelier sea-hound
Telling his loneliness to the solitary stars.

Hearing, the kennelled hound
Some neighbourhood and comfort found,
And slept beneath the comfortless high stars.

But that wild sea-hound
Unkennelled, called all night all round --
The unneighboured and uncomforted cold sea.

Perhaps I am deluded, but I would stack this small poem up against any number of poems written by "major" poets.  I loved this poem the first time that I read it, and it has stayed with me ever since.  Is it the simple, recurring rhymes?  (Which seem to mimic the cries of the hounds and the sway of the sea.)  Is it the repetition of certain words?  Or is it the lonely middle-of-the-night feeling that all of us know too well?  (If I am not being presumptuous.)

Best to leave it alone. 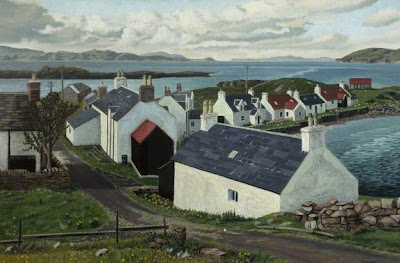 Truly worth to be known and appreciated, thank you for sharing this poem!

I know the feeling all too well.

Mr Pentz, I applaud you in your efforts "against the news of the world, and all the other deafening noise out there" Sadly the 20th century , the great 'Modernist' project among many other things fairly effectively either obliterated or hid from view so many wonderful poems and poets; novels too. I did'nt know the John Freeman piece at all. Thank you for that. As a result of your recent postings I have been delving into my Masefield again and another largely forgotten poet; Walter De la Mare. Long may you continue to post such delightful poems.

S.P.
Thanks for sharing this - another brand new discovery for me!

The tiny little details in this poem are exquisite: the set off "answering" (line 4), "Hearing" (line 7), and "Unkenneled (11) - (I guess the end line is practically functioning as comma in this case?) create soft, from the wings as it were, stage directions.

Merisi: it's always nice to hear from you. I'm glad that you like the poem. Thank you for stopping by.

acornmoon: as do I. I think that "The Hounds" captures the feeling quite well.

Mr Ashton: I agree with your views on "Modernism." To a great degree, it has simply added to the noise.

I'm pleased to have helped you discover "The Hounds." I'm an admirer of de la Mare's poetry also -- now that you mention it, it is time for me to revisit him as well.

Thank you very much for your kind words about the blog. As always, thank you for visiting.

B.R.: I agree: there are many nice touches in such a small space. I was curious about the dash at the end of line 11 as well, but I checked the original printing of the poem against a later printing, and it appears the same in both versions.

Yes, he did die young, didn't he? By the way, he was -- like Wallace Stevens -- an insurance company employee/poet.

This poem by Freeman makes me feel the immenseness of all things;
the searching for something like a safe port, even if it is just in the bay of a hound!
J.Masefield is another poet my dad would quote for us, along with mesmerizing doses of Vachel Lindsey, who I never see in print now, but once I think he was quite beloved. Long live the minor poets!

Thanks for posting it.

You've hit upon a fine description that I was not able to articulate: a sense of "the immenseness of all things" is at the heart of the poem, isn't it? And I also like your idea that the sound of the hounds provides a sort of "safe port." Thank you for those thoughts.

As ever, it is good to hear from you.

Fred: yes, "the three o'clock hour." I haven't been able to track this down, but your comment brought the words "the night thoughts flitting" to mind. I can't recall where that phrase comes from, though. Perhaps a poem by Hardy, but I'm not certain.

I appreciate your stopping by again. I'm glad that you like the poem.

Wow. Like so many of the poems you post here, that moved me deeply. Thanks for saving it and letting us see it!

Magister K: I'm pleased that the poem had that effect on you. I greatly appreciate your kind words. Thank you very much for visiting and commenting.