A. S. J. Tessimond's "Footnotes on Happiness" got me to thinking of another contemplation on happiness.  It comes from Philip Larkin.  He began writing the following poem after learning of the birth of Kingsley Amis's daughter Sally on January 17, 1954.  (Thus the title.)  He finished it on January 20.  He then sent it to Amis.

Tightly-folded bud,
I have wished you something
None of the others would:
Not the usual stuff
About being beautiful,
Or running off a spring
Of innocence and love --
They will all wish you that,
And should it prove possible,
Well, you're a lucky girl.

But if it shouldn't, then
May you be ordinary;
Have, like other women,
An average of talents:
Not ugly, not good-looking,
Nothing uncustomary
To pull you off your balance,
That, unworkable itself,
Stops all the rest from working.
In fact, may you be dull --
If that is what a skilled,
Vigilant, flexible,
Unemphasised, enthralled
Catching of happiness is called.

After receiving "Born Yesterday" from Larkin on January 22 or 23, Amis wrote to Larkin:  "Sodding good and touching was the poem, moving me a great deal as poem and as friendship-assertion.  I think it's about the nicest thing anyone could do for any new-born child."  Zachary Leader (editor), The Letters of Kingsley Amis (Harper Collins 2000), page 361. 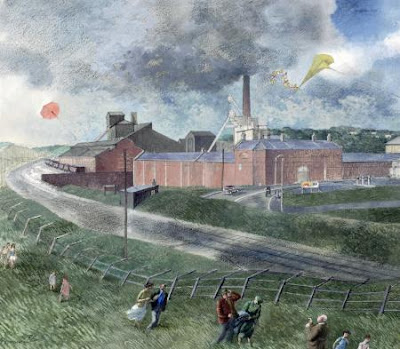 A beautiful poem, heartfelt and perceptive, and so at odds with Sally's tragic life.

Thank you for stopping by again, pomposa. Yes, the poem is sad in light of subsequent events.

I agree with your view of the poem. When I read critics who complain of Larkin as being "unemotional" or "gloomy" or "misanthropic," I wonder whether they have read this poem (and many others) that belie that assessment.

People probably get the wrong idea from the usual anthology poems like "High Windows" and "This Be the Verse," and never revise their opinion. I must admit I found Larkin a little repellent when I first read those, albeit in an impressive way. I only became a convert with "The Mower," still one of my favorites and I think one of the most compassionate poems ever written.

It's interesting to compare this poem to "A Prayer for My Daughter," which gives similar but not identical advice.

Akshay: thank you very much for visiting and commenting. I agree with you about people getting "the wrong idea from the usual anthology poems" -- which is a pity.

And I agree with you as well about "The Mower." "We should be careful//Of each other, we should be kind/While there is still time" are some of his loveliest lines. As you may be aware, The Philip Larkin Society has a "Poem of the Month" feature. On its website, Betty Mackereth (who was Larkin's secretary in the Brynmor Jones Library) writes this about the incident described in "The Mower": "I remember too well Philip telling me of the death of the hedgehog: it was in his office the following morning with tears streaming down his face. The resultant poem ends with a message for everyone."

Finally, thank you for the reference to "A Prayer for My Daughter" -- I hadn't made that connection.

Larkin always amazes. Since I write about the thirties, I'm guessing that maybe 1938 is the year the kite painting was created? Lovely.

Thank you for visiting again, Shelley. My source for the image of the painting did not provide a date for the painting -- I agree that it looks to be in the 30s, or perhaps the 40s.