Lists, Part One: "The Dearness Of Common Things"

When it comes to what I call "list poems" (a more imaginative term does not come to mind at the moment), Ivor Gurney is a good place to begin, for he was fond of lists.  "Encounters" -- which I have previously posted -- is a wonderful example.  Here is another.

Earth fine to handle;
The touch of clouds,
When the imagining arm leaps out to caress
Grey worsted or wool clouds.

Wool, rope, cloth, old pipes
Gone, warped in service;
And the one herb of tobacco,
The herb of grace, the censer weed,
Of whorled, blue, finger-traced curves.

In order to put Gurney's lists into perspective, the following poem may be helpful.  (I have posted it before, but it bears revisiting.)

Ibid.  The ellipses are in the original.  As is often the case with Gurney's poems (especially those that were not published in his lifetime), his punctuation (or lack thereof) can make things a bit puzzling.  But the point is clear, I think:  pay attention. 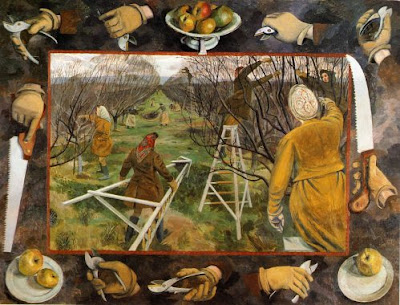 Ooh, that's a great combination of words and image! I haven't come across this picture by Evelyn Dunbar before. Living in a county rich in apple & pear orchards, this feels very close to home.

I hope you won't mind, but I've added a link from www.sergeandtweed.blogspot.com to this posting?

Murgatroyd: thank you very much for stopping by again, and for the comment. I'm pleased that you like the painting by Dunbar -- her "land girls" paintings are lovely. If you haven't already done so, have a look at "A Land Girl and the Bail Bull" (1945) at the Tate Britain website.

And thank you for the Serge and Tweed link. The thread about pruning and painting is interesting!

What a remarkable painting. The poems too, the rhythym of them reminds me a little of Gerard Manly Hopkins.
Thanks for the intoduction to both.
j

Ms. Whitmore: thank you very much for visiting and commenting. Yes, Dunbar's painting is wonderful, isn't it? Your comment about Gurney being reminiscent of Hopkins is an excellent one. Jon Silkin writes about Hopkins's possible influence on Gurney in Out of Battle: The Poetry of the Great War.