"To Build A Quiet City In His Mind": Weldon Kees

Weldon Kees was born in Beatrice, Nebraska in 1914.  In July of 1955, his abandoned car was found near the Golden Gate Bridge in San Francisco.  Although his body was never found, it was assumed that he had committed suicide.  However, an acquaintance claimed to have seen him a few years later in a bar in the Los Angeles area -- the two of them made eye contact, but she said it was clear to her that Kees did not want to be recognized.  The credibility of this anecdote is subject to debate.  Others believed that he disappeared into Mexico.  In any event, he was never heard from again.

Although Kees considered himself to be primarily a poet, he was also an artist (an abstract expressionist), a jazz pianist, a photographer, a filmmaker, and a journalist.  Donald Justice, who rescued Kees's poetry from neglect by assembling a collected edition in 1960, opined that Kees "is one of the bitterest poets in history."  While it is true that his views on American culture and on life in general could be quite scathing, there is also a wit, and an underlying sadness, to his poetry that help to balance out the bitterness perceived by Justice.

To Build a Quiet City in His Mind

To build a quiet city in his mind:
A single overwhelming wish; to build,
Not hastily, for there is so much wind,
So many eager smilers to be killed,
Obstructions one might overlook in haste:
The ruined structures cluttering the past,

A little at a time and slow is best,
Crawling as though through endless corridors,
Remembering always there are many doors
That open to admit the captured guest
Once only.
Yet in spite of loss and guilt
And hurricanes of time, it might be built:

A refuge, permanent, with trees that shade
When all the other cities die and fade.

Weldon Kees, Collected Poems: Revised Edition (edited by Donald Justice) (1975).  The poem is a sonnet.  The line spacing after "Once only" in line 11 appears in the original. 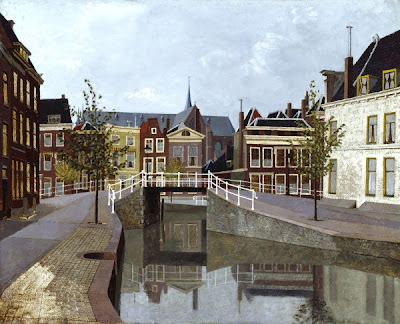 Another astounding job, Stephen, of rescuing and bringing to our attention another great poem (and poet). This one I feel in my solar plexus. It's the struggle of the individual soul against the generosity of the internet (among other distracting forms of love). I appreciate the way you tie it in to Kees' own biographical struggle. It's a bracing, meditative pause, to say the least.

Mr. Sigler: Thank you very much for visiting again, and for your kind words. And thank you as well for your observations. We are lucky that Justice had the persistence to keep Kees's poetry alive -- as this poem and many others show.

That is a wonderful painting as well.

From My Easy Chair: thank you for visiting again. I'm glad that you like the painting -- John Aldridge deserves to be better known.