In Memory Of Edward Thomas

These thick walls never shake beneath the rumbling wheel
No scratch of mole nor lisping worm you feel
So surely do these windows seal.

But here and there your music and your words are read
And savage learns what elm and badger said
To you who loved them and are dead.

So when the blackbird tries his cadences anew
There kindle still in eyes you never knew
The light that would have shone in you.

W. H. Auden, in Anne Harvey (editor), Elected Friends: Poems for and about Edward Thomas (Enitharmon Press 1991).  The editor states that "To E. T." is an "unpublished manuscript poem" that was "written around 1925 and not published during Auden's lifetime."

Eleanor Farjeon (1881-1965) and her brother Herbert ("Bertie") were friends of Thomas's.  Farjeon later became well-known as a writer of children's stories and poetry.  She also wrote a memoir of her friendship with Thomas.  She was in love with Thomas (which he, and others, could see), but their relationship remained solely a friendship.  The memoir closes with his death.  This is the final sentence of the book:

Ten years afterwards Bertie said to me, "I wake in the night and cry for Edward still." 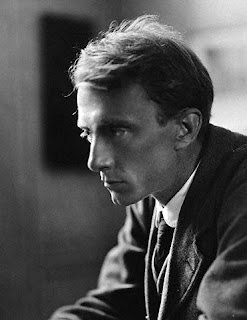