One of my favorite poems by Wilfred Owen is set in Edinburgh.  Yet the War still permeates the poem.  Alfred Buckham's "Aerial View of Edinburgh" (circa 1920), which I have previously posted, brought it to mind.

In twos and threes, they have not far to roam,
Crowds that thread eastward, gay of eyes;
Those seek no further than their quiet home,
Wives, walking westward, slow and wise.

Neither should I go fooling over clouds,
Following gleams unsafe, untrue,
And tiring after beauty through star-crowds,
Dared I go side by side with you;

Or be you in the gutter where you stand,
Pale rain-flawed phantom of the place,
With news of all the nations in your hand,
And all their sorrows in your face. 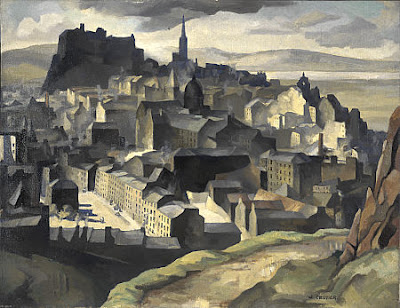 Owen wrote the poem in the summer or autumn of 1917, during his stay at Craiglockhart War Hospital in Edinburgh.  Craiglockhart was the psychiatric hospital for officers where Owen met Siegfried Sassoon, a fellow "patient."  (Sassoon was there at the instance of Robert Graves, who was trying to prevent Sassoon from being court-martialed for his public protest against the War.  Sassoon's psychiatric state was to be evaluated.  The authorities were unsure what to do with a protester who had been awarded the Military Cross for his actions in battle.)  Sassoon praised the manuscript poems that Owen showed him, and encouraged him to write about the War.

Owen was killed in action in France on November 4, 1918 -- one week before the Armistice.  The image below is a draft of the poem in Owen's hand. 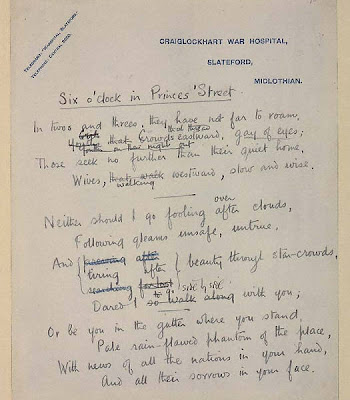 The British Library
The First World War Poetry Digital Archive
Posted by Stephen Pentz at 12:10 AM

zmkc: as always, thank you for stopping by, and for the kind words.