Although the following poem by Michael Longley has a list at its physical center, it is far, far more than a "list poem."  The subject is "poetry" -- in a wonderful, touching, ever-expanding number of senses.

When he was billeted in a ruined house in Arras
And found a hole in the wall beside his bed
And, rummaging inside, his hand rested on Keats
By Edward Thomas, did Edmund Blunden unearth
A volume which 'the tall, Shelley-like figure'
Gathering up for the last time his latherbrush,
Razor, towel, comb, cardigan, cap comforter,
Water bottle, socks, gas mask, great coat, rifle
And bayonet, hurrying out of the same building
To join his men and march into battle, left
Behind him like a gift, the author's own copy?
When Thomas Hardy died his widow gave Blunden
As a memento of many visits to Max Gate
His treasured copy of Edward Thomas's Poems.

Michael Longley states in a note that "Poetry" is "based on episodes from Edmund Blunden by Barry Webb."  The episodes of which Longley speaks are these:

"One find late in 1918 caused [Blunden] particular pleasure.  Billeted in a ruined house in Arras, he found a hole in the wall by the side of his bed.  Feeling inside, his hand rested on a copy of Edward Thomas's study of John Keats.  Thomas had been killed at the battle of Arras, and Edmund never gave up hope that it was the author's own copy:  'I fancied that I could see the tall, Shelley-like figure of the poet gathering together his equipment for the last time, hastening out of this ruined building to join his men and march into battle, and forgetting his copy of John Keats.'
. . . . . .
On Hardy's death in 1928 his widow presented Edmund with Hardy's treasured copy of Edward Thomas's Poems as a memento of these visits [to Max Gate]." 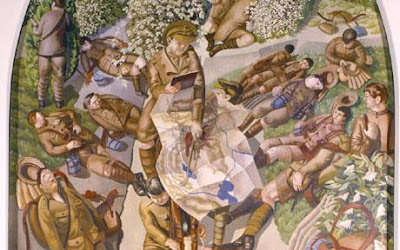