I once suggested that A. S. J. Tessimond was a "neglected" poet.  However, thoughtful readers pointed out that he had recently been the subject of a feature on BBC Radio 4, and that a new edition of his Collected Poems was to be published in 2010.  Thus, I am happy to report that I was wrong.

Here is a poem by Tessimond that perhaps qualifies as an Explanation of Life, or at least that part of Life known as "happiness."  The tone of the poem -- wittily undeceived and cheerfully rueful -- is typical of Tessimond.  I am reminded of Louis MacNeice and Philip Larkin.  (But then, I tend to look for Larkin and MacNeice everywhere, I suppose.)

Happiness filters
Out through a crack in the door, through the net's reticulations.
But also in.

The old cat Patience
Watching the hole with folded paws and quiet tail
Can seldom catch it.

You cannot say
It will keep an appointment, or pass the same street corner twice.
Nor say it won't.

It will not yield
Except to the light, the careless, the accidental hand,
And easily bruises.

It is brittle as sand.
It is more and less than you hoped to find.  It has never quite
Your own ideas.

It shows no spite
Or favour in choosing its host.  It is, like God,
Casual, odd.

An aside: Tessimond rhymes the second line of the first stanza with the first line of the second stanza (and so on through all eight stanzas) -- a clever touch that ties the "footnotes" together. 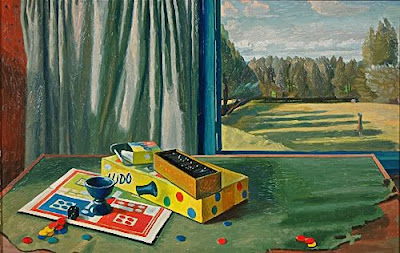