"Love Without Hope": Two Poems On The Same Theme

The following poem is one of Robert Graves's best-known poems -- at any rate, it seems to pop up in anthologies quite a bit.  It shows that, when he isn't in one of his moony, mythological, exasperating "White Goddess" moods, Graves is very good indeed.

Love without hope, as when the young bird-catcher
Swept off his tall hat to the Squire's own daughter,
So let the imprisoned larks escape and fly
Singing about her head, as she rode by.

For some reason, I thought of "Love Without Hope" in connection with a poem by Joan Barton.  But now I wonder if these two poems are in fact "on the same theme."  In any event . . .

The short cut home lay through the cemetery --
A suburban shrubbery swallowing up old graves
Iron palings tipped with rusted fleur-de-lys
A sort of cottage orne at the gates,
Ridiculous and sad;

And lost in their laurel groves,
Eaten up by moss,
Stained marble, flaking stone like hatches down,
The unloved unvisited dead:

In the no-man's-land of dusk a short cut home --
The exultant sense of life a trail of fire
Drawn into that tunnel roofed with the cypress smell
And walled with silence adding year to year:

Too far, too far: always
Under the smothering boughs in airless dark
The spirit dwindled, and the fire
Flickered then failed: 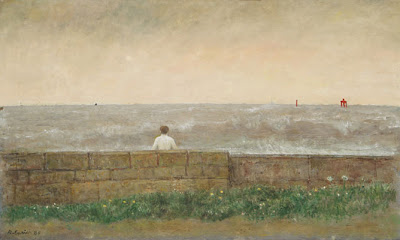 Having just read your earlier post containing Auden's poem about Edward Thomas, I can't help thinking of Eleanor Farjeon reading this one.

Thank you, zmkc -- I hadn't thought of that.

There is a passage in Farjeon's Edward Thomas: The Last Four Years which your thought brings to mind. In one of his last letters to her, Thomas wrote: 'What is coming is to be worse than anything I know so far. It is worse for you and for Helen [his wife] and Mother, I know.'

In her book, Farjeon writes: 'In those two words "For you", Edward laid by his reserve for the only time in our friendship, and allowed me to know that he knew how much I loved him.' (Page 259.)