"A City Like A Water-Lily, Less Seen Than Reflected"

After a sojourn in the icy land of "No Possum, No Sop, No Taters," a visit to Venice is in order.  This visit shall be in the company of Arthur Symons (1865-1945).  I have a soft spot in my heart for the "decadent" poets of the 1890s -- those tortured souls who, after spending long nights in an absinthe haze, taking trips across the Channel to Dieppe, and writing a poem titled "Spleen," tended to become Catholic priests or university librarians (if they did not die young).

Symons is in many ways the quintessential Nineties poet.  Much of his poetry is of the melodramatic romantic sort (the lost angel-demon lover, et cetera), but he did, I think, write some fine poems.  His best poems tend to be evocations of particular places -- Dieppe, Venice, the coast of England (particularly Cornwall), and Spain, for instance.  (He also wrote a number of interesting prose pieces about his travels.  Most of the pieces may be found in Cities and Sea-Coasts and Islands.)  Venice -- that alluring and vaguely disquieting place -- was, not surprisingly, a favorite of the Nineties poets.

Water and marble and that silentness
Which is not broken by a wheel or hoof;
A city like a water-lily, less
Seen than reflected, palace wall and roof,
In the unfruitful waters motionless,
Without one living grass's green reproof;
A city without joy or weariness,
Itself beholding, from itself aloof. 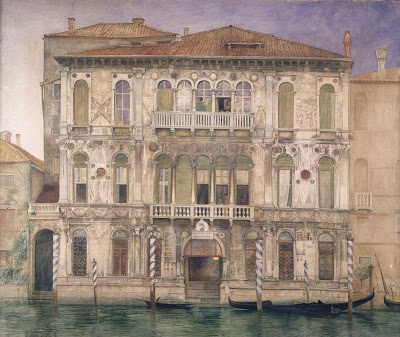 John Wharlton Bunney
"Palazzo Manzoni on the Grand Canal" (1871)
Posted by Stephen Pentz at 12:10 AM

Another great choice of painting to accompany the words. I love the muted quality of the image.
Thank you for the introduction to Pekka Halonen too (another avenue of exploration, hoorah!)

I'm happy that you like the painting by Wharlton Bunney (wonderful name!) -- I came across it when I was searching for something about John Ruskin, and discovered the St. George's Museum at Walkley (which Ruskin helped to establish). I'm pleased that you like Pekka Halonen as well -- there are a number of fine Scandinavian artists out there that I have stumbled upon in the past couple of years.

As always, thanks for dropping by.